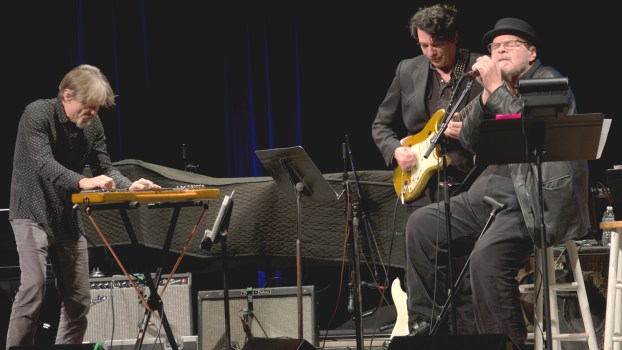 The Tribune/Heath Harrison Pere Ubu, the acclaimed Cleveland band that has influenced alternative and avante garde music for 40 years, performs on Mountain Stage at the Culture Center theater in Charleston on Sunday. 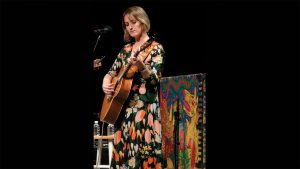 The Tribune/Heath Harrison
Joan Shelley, a rising music star from Louisville, performs on Mountain Stage at the Culture Center theater in Charleston on Sunday.

CHARLESTON — Mountain Stage is set wrap up 2016 with a show on Dec. 3 at the West Virginia Culture Center.

The 7 p.m. taping will feature performances from The Mountain Goats, Joe Henry, Nellie McKay and John K. Samson and will mark the program’s 34th anniversary.

The show, which is aired on West Virginia Public Radio, just taped a broadcast which host Larry Groce called “my favorite of the year.”

Shelley, a rising star from Louisville, was returning to the show for a third appearance, this time to play songs recorded on her latest album with Jeff Tweedy of Wilco. The two met at a Mountain Stage taping in February 2016.

Fronted by David Thomas, Pere Ubu, who have been recording since the mid-1970s, played mostly from their new album “20 years in a Montana Missile Silo.”

“They’re not for everyone, but I like ‘em,” Groce said of Thomas’ intense, howling  performance.

The show is available for podcast on Mountain Stage’s website. The program airs in the Tri-State area on WVWV-FM 89.9 out of Huntington.

In addition to Mountain Stage’s taping, the program’s longtime pianist, Bob Thompson is set to perform his popular annual show for the holidays. “Joy to the World” will also feature vocalist Landau Eugene Murphy and will take place at the West Virginia Culture Center Theater at 8 p.m. on Dec. 14.

Bellefonte Cosmetic and Reconstructive Surgery will host a free holiday open house from 5-:30 p.m. on Thursday, Dec. 7 at... read more