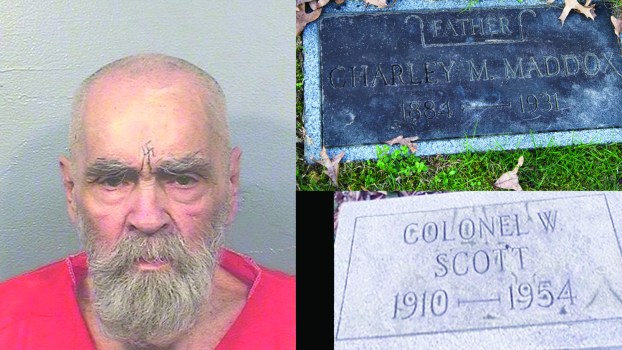 CALIFORNIA DEPARTMENT OF CORRECTIONS Left: Cult leader Charles Manson is seen in this August 2017 booking photo from Corcoran State Prison in California. The Tribune/Heath Harrison TOP RIGHT: Charles Milles Maddox, the maternal grandfather of Charles Manson, is buried in Rose Hill Cemetery in Ashland. Manson’s mother named her son after her father, who had died a few years prior. BOTTOM RIGHT: Colonel Scott, who is generally believed to be the biological father of Charles Manson, is buried in Catlettsburg Cemetery.

Manson roots can be traced to Tri-State

Cult leader’s parents were from Boyd County, met in Ironton

ASHLAND — Cult leader Charles Manson died last Sunday at age 83. The head of the Manson Family and mastermind of the brutal Tate-Labianca murders of 1969 is best known for the crimes he committed in California, but the origins of the man who would be found guilty for the deaths of seven people can be traced to Appalachia.

While the region obviously prefers not to highlight the ties, Jim Powers, information specialist and local historian at the Boyd County library, said the library does keep a historical file on Manson.

“We do it mainly to debunk the urban legends,” he said.

Powers said in the week following Manson’s death, a few media outlets have stopped by, including a television station in Kentucky to peruse the file.

Manson’s mother was Kathleen Maddox, who was born in Morehead, Kentucky in 1918 to railroad conductor Charles Maddox and his wife, Nancy. The family moved to Ashland, where she grew up in what was described as a strict religious family.

Charles died in 1931, when Kathleen was 13 years old and was buried in Rose Hill Cemetery in Ashland. Three years later, the 16-year-old was regularly visiting the nightclub Ritzy Ray’s, located on South Third Street in Ironton.
Manson, in an interview with writer Nuel Emmons, described his mother as “a pretty girl” who was “barely five feet in height” (Manson himself was only 5’2”).

It was at Ritzy Ray’s where Kathleen is said to have met Colonel Scott, of Catlettsburg (his given name and not a military rank), the man generally believed to be Manson’s biological father.

Manson described his father to Emmons as “a transient laborer working on a local dam project.”

After Kathleen informed Scott she was pregnant, he left her. According to former District Attorney Vincent Bugliosi, who successfully prosecuted Manson and his followers for the murders, it is likely that Scott never met his son.

Following Manson’s birth, Kathleen filed and won a paternity suit against Scott, and he was ordered to pay a small amount of support, on which he defaulted. Scott would go on to work for the Baltimore and Ohio Railway and as a custodian for the Elks Club in Catlettsburg. He married twice, fathering more children, before dying of cirrhosis at age 44 in 1954.

Scott is buried in Catlettsburg Cemetery. Manson was omitted from the surviving relatives in his obituary.

Kathleen moved to Cincinnati shortly before Manson was born. His birth certificate listed him as “No-name Maddox.” In the following weeks, Kathleen gave him the name Charles Milles Maddox, after her late father.

He would only keep this name a short while, as Kathleen eventually met and married William Eugene Manson, a local laborer, whose last name she gave to her son. The marriage would only last three years.

During this period, Maddox worked as a prostitute and drank heavily, disappearing for days at a time, according to biographers. At some point, following the dissolution of her marriage, she and her son moved to Ashland, briefly living in her mother’s home on Hilton Avenue.

Eventually, she moved to Dunbar and Charleston, West Virgnia, where, in 1939, at the age of 20, she and her older brother Luther, were arrested and pled guilty after robbing an acquaintance, Frank Martin, of $35 using a ketchup bottle filled with salt as a stand-in for a pistol.

Kathleen was sentenced to five years in prison and Manson, then 5 years old, was placed with relatives in McMechen, West Virginia, until she was paroled three years later.

The young Manson began to gain a reputation for truancy and theft. Following Kathleen’s release, they moved to Indiana, where she attempted to place him in foster homes, and then a reform school, from which he escaped. After his mother returned him to the institution, he never lived with her again. Kathleen died in Spokane, Washington in 1973.
From there, his crimes increased in frequency, first getting sentenced to Boys Town by a judge after caught for burglary, then the Indiana Boys School, from which he escaped at 17 and attempted to drive to California in a series of stolen cars, landing him his first prison sentence.

A series of prison stays and two failed marriages would follow, before he arrived in California, where he assembled the group who would carry out the 1969 slayings.

In decades of interviews, Manson gave contradictory accounts of his childhood and adolescence, leaving much to speculation. His far from idyllic upbringing and abuse he claimed has led many a biographer to engage in the “nature vs. nurture” debate and how it affected him mentally.

However, Bugliosi, in an interview with Time magazine shortly before his death in 2015, disagreed with the findings of the parole boards that claimed Manson was mentally ill.

The prosecutor said, instead, Manson had developed his own justification to himself for his actions, for which he was solely responsible.

“His moral values were completely twisted and warped, but let’s not confuse that with insanity,” Bugliosi said. “He was crazy in the way that Hitler was crazy. “He’s not crazy — he’s an evil, sophisticated con man. We’re talking about evil here, as opposed to mental illness. Manson wanted to kill as many people as he could.”

Portman: Roy Moore should step aside