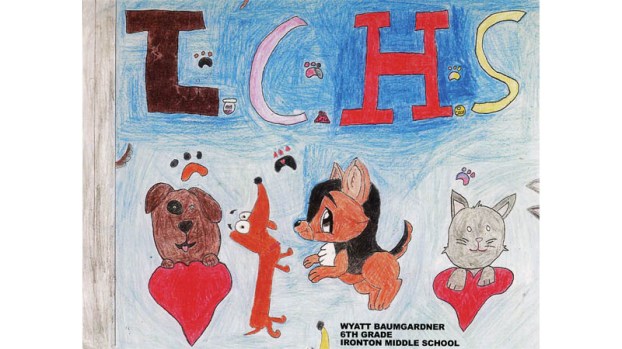 The artwork of Wyatt Baumgardner, a sixth grader at Ironton Middle School, was chosen as the cover of the Lawrence County Humane Society’s fundraising calendar.

Copies on sale at health department

The Lawrence County Humane Society debuted its calendar on Monday night, the first edition of its new fundraising effort.

In order to raise funds for the group, organizers sent out requests to all school districts in Lawrence County, asking students to draw their pets and submit the art for publication, Christi Murphy, vice president of the Humane Society, said.

She said the group received hundreds of entries, which were then spread out over the floor of the Ironton City Center for judging.

“We had a blast looking through all of them,” Murphy said. “We had a great response.”

She said elementary and middle schools were especially receptive to the request and they received entries from almost all of the county’s school districts.

After voting, the group selected 13 winners, one for each month and the cover.

The cover art was done by Wyatt Baumgardner, a sixth grader at Ironton Middle School, who drew three dogs and a cat.

One of the dogs, Bailey, he said recently came to his home. Another shown was Peanut, a wiener dog. He also included his cat, as well as another dog, which came from his imagination.

“I was very surprised,” he said, on learning he was picked for the cover.

Murphy said all funds raised by the calendar sales will go to the Humane Society, primarily for controlling the animal population.

“The solution to the stray population is spaying and neutering, so animals will not have more babies, she said.

Copies of the calendar are available for $10 and are for sale at the Lawrence County Health Department or by calling Murphy at 740-532-8495.

Murphy said the group hopes to do another calendar next year.

Following the presentation of the calendar, the Humane Society hosted its regular meeting.

Humane Officer Randy Thompson said it had been a slow month, with 20 reports, of which four were for equines and two for cats.

Memorial service helps families during holiday PROCTORVILLE— Losing a loved one is tough, and coming into the holiday season makes... read more