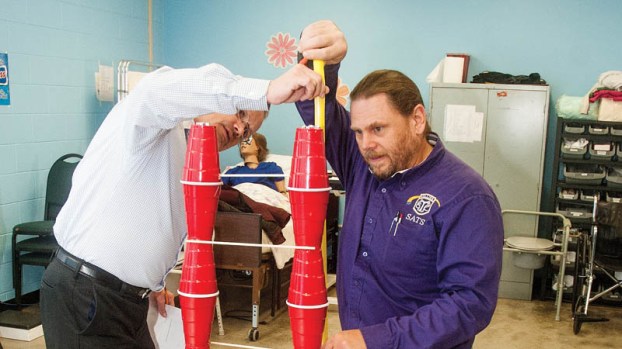 Competition at IHS was between four Project Lead the Way schools

The competition was organized by Collins Career Technical Center’s STEM classes through the Project Lead the Way program, which operates in several Lawrence County school districts.

Monteville said teams that save money can pull ahead in the money competition and points are awarded from every $100 they turn in at the end of the day.

In addition, there were six competitions set up for the students to take part in.

One took advantage of their design skills and proficiency at 3-D printing.

“We asked them to talk to the biomed programs at their schools,” Monteville said. “They were asked to design a useful gadget for the program and 3-D print a prototype of a solution.”

Monteville showed examples in which students had come up with racks for drying beakers and wall mounts for holding pipettes.

Several stations were set up throughout the school for the other competitions.

One was a math test, conducted by Jim Shay, a retired instructor for PLTW.

“These are engineering math problems, where they figure material usage, cost and volume,” he said.

Another event had students design a parachute to drop a ping-pong ball from the school’s gymnasium balcony and timed the length of the fall, while another had them determine the chronological placement of inventions, including a magnifying glass, Velcro, an electric locomotive and calculator.

Monteville said judges were brought in from the Robert C. Byrd Institute at Marshall University, as well as CCTC.

Chesapeake won in the construction and money competitions; Ironton won in the communications challenge and South Point took first in historical chronology.

“They doubled the score of everyone else,” Monteville said of their math performance.

As a result of their efforts, the group won the rights to the traveling trophy until next year’s competition.

“Hopefully, you can see where five years of Project lead the Way have helped you,” Monteville told the assembled group, as they concluded with the awards ceremony.

The next event for Project Lead the Way is VEX Robotics completion, which will take place, along with West Virginia schools, at Marshall University on Jan. 27.

Kicking off the season