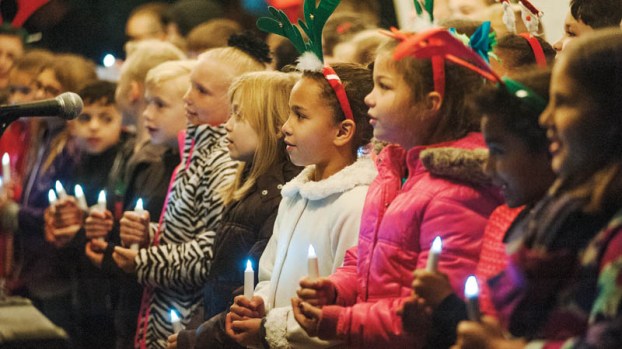 CHESAPEAKE — The Christmas season has begun in the village of Chesapeake.

As they do every year in the week following Thanksgiving, the Chesapeake Area Citizens Coalition hosted the annual tree lighting at Triangle Park.

The weather had been damp and gloomy throughout the day, but the rain held off until the end of the event.

The event kicked off with a prayer from Chesapeake United Methodist Pastor Charles Case, who said they are especially praying for the children, for whom the season is important.

Then, attendees were treated to a musical performance from the Chesapeake High School choir, who sang a number of carols, then finished with a rendition of Leonard Cohen’s “Hallelujah.”

The high school students were followed by the third grade class of Chesapeake Elementary.

Both groups were conducted by teacher Bethany Himes.

Himes had assistance with the younger choir from Josie Fisher, a student teacher at Marshall University. She said Fisher has been working under her the past several days and wrapped up her time with the holiday event.

After the singing, Santa arrived at the park, riding a fire truck and escorted by police. A few children ran the length of the park, following the truck as it made its way up the street.

Families were then invited for pictures with Santa, while the CACC offered hot chocolate to the crowd under their tent.

The ceremony drew a number of local officials, such as Mayor Tommy Templeton and council members Paul Hart and Richard McMaster, as well as visitors from county and other local governments, including county commissioners Deanna Holliday and Freddie Hayes Jr.,

Dick Gilpin, the village’s former mayor and head of CACC, said the group received a lot of help in organizing the event.

“The Flower Shop gave the decorations and ribbon for the tree, and Bucky Harris, from Armstrong helped put up the lights,” he said.

More holiday events are planned around the village. Chesapeake Elementary will host a Christmas program on Dec. 14 at 6 p.m., Himes said.