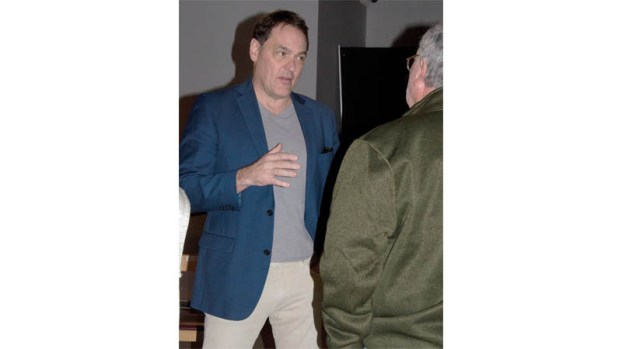 Former U.S. Rep. Zack Space, who represented Ohio as a Democrat from 2007-2011, speaks with attendees during a Meet and Greet event at the Ro-Na Theater in Ironton on Monday. Space is running for the position of Ohio State Auditor.

Zack Space says he is running for Ohio State Auditor to curtail the impact of special interests on government.

“I’m thoroughly convinced our Democratic process, which we cherish and love so much, has been compromised and perverted by the influence of money and by the influence of politcal self interest. The auditor’s office represents a chance to do something about those issues.”

Space, who served as a Democrat in the U.S. House from 2007-2011, is a Dover resident and has since worked as a consultant for non-profits, colleges and oil and gas companies.

Space was in town on Monday for a meet and greet at the Ro-Na Theater, organized by Lawrence County Clerk of Courts Mike Patterson. Space was last in town for the county’s Democratic Party dinner in October. The event was part of a tour of southeast Ohio River cities.

Space stopped by the Tribune prior to the event to discuss his candidacy to fill the seat being vacated by Republican Dave Yost, who is running for Ohio Attorney General.

Space said the impact of money is hindering the ability of government to address issues in the state.

“If we are going to be able to tackle challenges, our government needs to be able to act in a rational and objective way,” he said.

Space also said he wants to address the issue of gerrymandering, in which lines for lawmaker districts are drawn to benefit a political party.

“These lines are drawn with one thing in mind — to maximize partisan advantage,” he said.

Space said, as a result, incumbents are often assured of re-election, due to a district’s composition and the only challenge they face is in a primary.

“Not only does gerrymandering disenfranchise millions of Ohioans, a lot of these races are pre-determined,” he said.

Space said the only way an incumbent can be threated is, in a “hyper-partisan” district, someone runs further to the right or left.

He said this causes the political spectrum to become more polarized, “pulls parties in opposite directions and leads to dysfunction and “the inability to get anything done.”

“Then they can’t be seen working together,” he said. “It’s absurd.”

Space said the auditor sits on the redistricting commission, which oversees the drawing up of districts.

On the issue of money in politics, Space said, while the auditor can not implement campaign finance legislation, the office “serves as a watchdog of taxpayer money.”

He cited one example where this could come into play, the controversy over the Electronic College of Tomorrow, a for-profit charter school that receives taxpayer funds.

He said lawmakers have received “millions” of campaign funds from ECOT’s founder.

“And they’ve looked the other way,” he said of lawmakers. “We don’t get to see their books. Graduation rates are less than 40 percent. It’s abysmal.”

Space said, as auditor, he would declare ECOT’s books “unauditable.”

“We no longer have the ability to see what is done with the money,” he said. “As auditor, I will do everything I can, using the powers of the office to shine a light on the role campaign contributions and money are playing on policy,” he said.

Space said, so far, he does not have an opponent in next year’s primary.

He is expected to face Republican Keith Faber, the former president of the Ohio Senate, in the fall race.

Has focus on capital improvement issues The first draft of the 2018 Lawrence County General Fund was accepted at the... read more