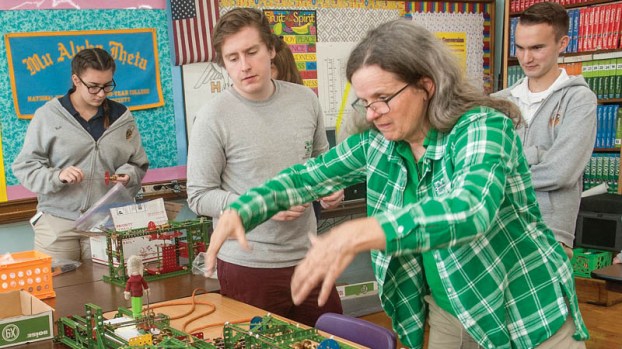 Calculus class use their hands to solve problems

While the machine is built out of a child’s metal building set, the problems it solves are no child’s play.

The machine in question is a differential analyzer, sort of mechanical computer first developed in the late 1800s and used to figure out such complex systems as tides and artillery range.

Students in the St. Joseph High School AP calculus class have been working with Dr. Bonita Lawrence from Marshall University’s Mathematics Department on building integrators for a differential analyzer for the past three weeks.

Years ago, Lawrence became fascinated with a differential analyzer in the London Museum of Science.

“I work in differential equations and this was the first, sort-of, differential computer. And this is the sort of work I do, so it sparked something in me.” she said. “It has had a huge impact on my career.”

The first differential analyzer in England was built one out of Meccano parts, toys that are more familiar to Americans as an Erector Set, rather than machined parts. So Lawrence followed suit. But the modern version of the parts is often made with plastic and is too flexible, so she found a contact in India and spent thousands of dollars to get the reproduction Meccano parts with brass gears and screws.

The system is complicated and has a unique way of getting answers.

“You program it with a screwdriver,” Lawrence said. “The scientist observing the situation has to create a mathematical model and then we program the model on this machine. And then the pen draws the solution on the output table.”

Lawrence said teaching the class at St. Joseph to build the integrator was realizing part of her dream.

“This is the first class of high school students I’ve taught this,” she said.

AP Calculus teacher Tamara Johnson met Lawrence at a mathematics competition a couple of years ago and was fascinated by the differential analyzer.

“She mentioned that she would like to share it with high schoolers,” Johnson said. Last year, she took a group of students to see the machine in operation. “They really enjoyed it, so we discussed having a differential analyzer here at St. Joe.”

Senior Clay Willis said that it was a neat project to work on.

“It’s really different than your usual day in math class, just solving problems and learning new concepts,” he said. “We get to put our hands together and work on a cool project.”

The class is projected to finish building the integrators in March.