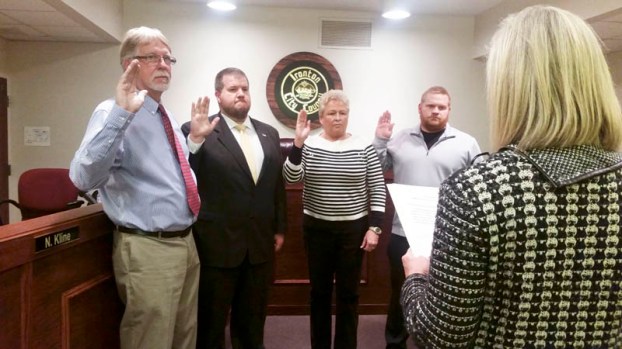 On Friday, the Ironton City Council had its organizational meeting for the 2018.

It was a short meeting since it consisted of swearing in those who won seats in the Nov. 7 election and appointing people to various positions.

The meeting opened with the appointment of Marta Leach to the position of temporary clerk.

Leach then swore in new member, Nate Kline, and incumbents Beth Rist, Bob Cleary and Craig Harvey, were sworn in. The meeting’s chair was Rich Blankenship. The position is determined by who got the most votes in the 2016 election, which was Kevin Waldo but he was out of town.

So the position fell to Blankenship as the council member who got the second most votes.

The council voted to fill several positions. Leach was chosen for the council clerk position. The Anderson Law Firm was chosen to be the city solicitor and Brigham Anderson was selected as city prosecutor. John Elam was chosen as the city finance director.

After the new council’s business was done. Blankenship welcomed Kline to the council as well as those who returned.

“I think it is going to be a good two years,” Blankenship said, before concluding the meeting.

He said he was very thankful he was going to be working with a individuals who have a lot of experience. Both Blankenship and Bob Cleary have been Ironton’s mayor as has Elam.

“I look forward to bringing some new ideas and helping out however I can,” he said.

Cleary  has been on council for nearly 30 years.

“We changed a few seats around,” he said. “I think it is going to work out really well. I look forward to it.”

Chuck O’Leary will chair the  public utility committee. Rist and Harvey are the other two members.

Blankenship will chair the industrial and commercial committee. Cleary and O’Leary are the other members.

Harvey will chair the parks and recreation committee and Rist and Kline will be the other two members.

Waldo will chair the annexation committee and Blankenship and Kline will serve on it.

The strategic planning committee will be O’Leary and Kline and Waldo will chair it.

The Ironton City Council meets at 6 p.m on the second and fourth Thursday of the

A service to remember loved ones