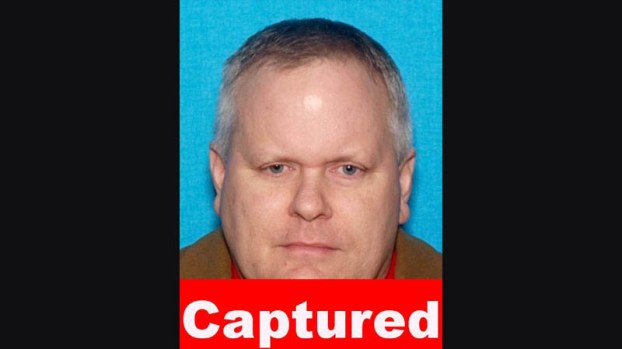 Kentucky attorney Eric Conn, seen in this FBI suspect photo, had been on the run since March while on $1.25 million bail. He was captured outside a Pizza Hut in Honduras and was returned to Kentucky on Tuesday.

TEGUCIGALPA, Honduras (AP) — A lawyer who spent six months on the run after pleading guilty in a $500 million Social Security fraud scheme was being flown back to Kentucky on Tuesday after he was caught outside a Pizza Hut in Honduras.

Eric Conn was handed over to the FBI after his capture by a SWAT team as he left the restaurant in the coastal city of La Ceiba. Spokesman Jorge Galindo of the country’s Technical Agency of Criminal Investigation said they left Honduras on a private plane. Conn was expected to arrive in Lexington, Kentucky, late Tuesday afternoon.

“As promised, Mr. Conn will now be held accountable for his actions, the people he deceived and the lives he shattered, including all the victims of his greed in eastern Kentucky,” said Amy Hess, special agent in charge of the Louisville field office for the FBI.

Conn speaks multiple languages, had crossed the border 140 times over 10 years and had told at least six people he would flee the country rather than go to jail for his crimes. Yet a federal judge released Conn on $1.25 million bail, and allowed him to remain free even after he pleaded guilty in March to stealing from the federal government and bribing a judge to fix Social Security fraud cases.

Conn fled on June 2. He cut off his electronic ankle monitor and put it inside a metallic pouch designed to suppress electronic signals, authorities said. While nearly a dozen law enforcement agencies searched for the fugitive, he was sentenced in absentia last summer to a 12-year prison term — the maximum possible.

Now 57 according to his FBI wanted poster, Conn faces many more years in prison if convicted of charges related to his escape.

Authorities interviewed dozens of people, analyzed his bank accounts, and meticulously read through emails and social media posts purported to be from Conn. They searched his former law office and his mother’s house in Stanville, Kentucky. The hunt led searchers to a Walmart parking lot in New Mexico over the summer and, finally, to the Pizza Hut in Honduras on Saturday.

Ultimately, the Honduras public magistrate’s office said his arrest was “the product of arduous intelligence, surveillance and tailing by the agents.”

Conn, wearing a blue polo shirt with close-cropped, reddish-gray hair, was led away in handcuffs by Honduran police agents with ballistic vests and assault rifles, and then turned over to the FBI, which flew him home in a private plane.

Conn’s capture was cheered by his former clients and their families, who have struggled to make ends meet while fighting to keep their Social Security disability checks.

“That’s wonderful,” said Donna Dye, whose husband was among Conn’s clients in Appalachia. “I never thought they would catch him. He let people like my husband have trust in him, and he let that down.”

An indictment unsealed in October alleged that one of his employees opened a bank account Conn used to transfer money, tested security at the Mexican border and bought a pickup truck for use in Conn’s escape. The employee, Curtis Lee Wyatt, has pleaded not guilty to aiding in Conn’s escape and abetting his failure to appear.

The same indictment claims Conn hatched his escape plot around June 2016, two months after he was first indicted and a year before his disappearance.

Conn, who started his law practice in a trailer in 1993, had portrayed himself as “Mr. Social Security.” He fueled that persona with outlandish TV commercials and small-scale replicas of the Statue of Liberty and the Lincoln Memorial at his office in eastern Kentucky.

Conn represented thousands in successful claims for Social Security benefits. But his empire crumbled when authorities discovered he had been bribing a doctor and judge to approve disability claims based on fake medical evidence.

Among his former clients in the impoverished coalfields of eastern Kentucky and West Virginia are many people with legitimate disabilities.

Donna Dye’s husband, Timothy, was among the throngs of Conn’s clients who had to fight to keep their disability checks. Timothy Dye went on disability for chronic arthritis after working decades in coal mines.

“With his capture, I’m hoping we can get this ordeal behind us, put him in prison where he belongs and start to undo the damage he has done to his former clients,” Pillersdorf said by phone Monday night.

As part of the fallout, the Social Security Administration identified about 1,500 beneficiaries, mostly in eastern Kentucky, who were made to undergo hearings. Pillersdorf said those hearings are nearly complete, and about 700 have been found eligible to maintain the benefits.