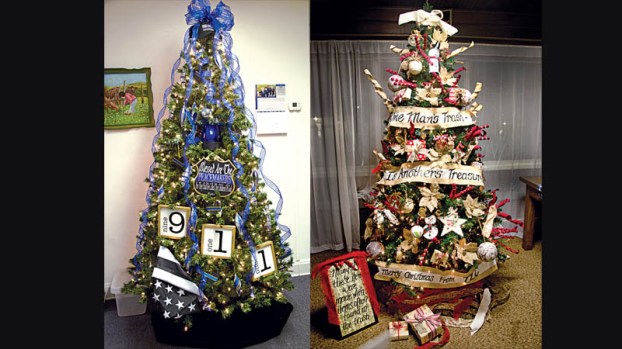 (LEFT) A Christmas tree in Chesapeake village hall, donated by law enforcement support organization Ohio Going Blue, serves to honor the memory of Chesapeake police office Aaron Christian, who was killed in a cruiser crash in 2016. (RIGHT) A Christmas tree, donated by members of Operation TLC, serves as a memorial to Billie Smith, the group’s founder. The tree contains many recycled items as decorations.

CHESAPEAKE — The village hall in Chesapeake is decorated for the holidays and the two Christmas trees standing inside also serve as a memorial to two Lawrence County residents who died last year.

The first tree, located near the entrance, is a police-themed tree by Ohio Going Blue, a group offering support to law enforcement in the state.

“They sent it to us last year, because of Aaron,” Mayor Tommy Templeton said, referring to Chesapeake Police Officer Aaron Christian.

Christian, 24, died Oct. 18, 2016, from injuries he received in a crash a month earlier in his cruiser while traveling on State Route 7. He was an Ironton resident who had previously served on Coal Grove’s police force.

A second tree, located in council chambers, stands in memory of Billie Smith, a Chesapeake resident and the founder of Operation TLC, an organization dedicated to county beautification.

The tree was donated by Tanya Wilson and was Operation TLC’s entry into the Lawrence County Festival of trees a few years ago.

With a banner reading, “One man’s trash is another’s treasure,” many of the items on the tree are made of recycled items that can be found in the trash.

Templeton said the village received the trees last year and that this is their second year on display in the hall.

The Ironton City Center will have two events for the Christmas season, one night of singing and one night of... read more