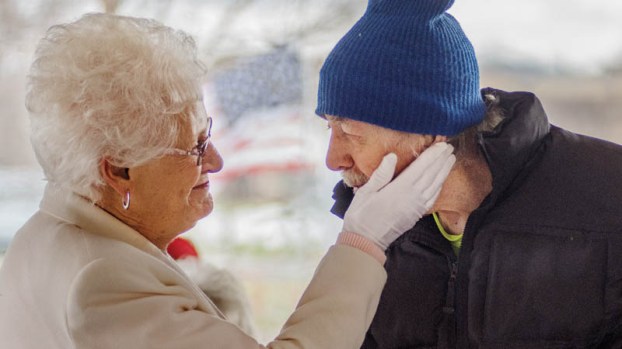 Delores Sartas, of Grayson, pats the cheek of Proctor R. Davis, of Greenup, during a Pearl Harbor memorial service on Thursday. Davis, 96, is a survivor of Pearl Harbor.

ASHLAND — Many people braved the cold on Thursday to travel to Northeast Kentucky Veterans Cemetery to mark the 76th anniversary of the bombing of Pearl Harbor.

The program was organized by Delores Sarpas, of Grayson, Kentucky, who decided to put the event together after an event for last year’s milestone drew an impressive turnout.

Ret. Col. Ralph Newman, who returned as keynote speaker, thanked her for her efforts.

“We’re so thankful you chose to have this service again,” he said.

“I just can’t help myself,” she replied.

The Dec. 7, 1941 surprise attack on the U.S. Pacific fleet by the Imperial Japanese Navy killed 2,043 Americans and wounded 1,178 and led to the United States entry into World War II.

The event began with a prayer from Rita Lynn Carter, followed by the presentation of colors from the West Carter High School ROTC.

After the pledge of allegiance and the national anthem, the ROTC cadets conducted the Missing Man ceremony, at a table, intended to represent all missing and action and killed in action in American conflicts.

Following that, a bell was rung, once for each ship sunk in the attack.

For each toll of the bell, a member of the Marine Corps League from Greenup stepped forward to place a rose in a vase and give a salute.

Local singer Tony Wilson performed a rendition of Lee Greenwood’s “God Bless the USA,” before the event was turned over to Newman who spoke of the guest of honor at the ceremony, Proctor R. Davis, of Greenup County, a survivor of the attack on Pearl Harbor.

Davis, 96, was 18 years old and serving as a sergeant in the U.S. Army when the Japanese bombers struck. Newman read aloud some of Davis’ recollections of the attack.

“The attack came just before 8 a.m.,” Davis wrote of its unexpected nature. “Since it was a Sunday, we were asleep.”

He said he saw the bombs strike the USS Arizona, which remains at the bottom of the Pacific at the Pearl Harbor Memorial to this day.

“It took direct hit after hit and we knew it would not survive,” he wrote.

He said he saw a plane crash across the street, as well as another, which crashed without dropping its bomb. Davis said he figured the pilot had been killed long before it came close to the ground.

“The planes came so close and so low, I took out one myself,” Davis wrote.

Davis received loud applause from those in attendance.

“We are so proud to have him here today,” Sarpas said. “Thank you for your service, Sir.”

Newman said Americans must not forget the sacrifices or what was endured by those at Pearl Harbor.

“It’s our duty as patriotic Americans to educate future generations about that day and what it meant to our country,” he said.

Newman said the attack has remained “a date which will live in infamy,” as President Franklin D. Roosevelt described it in his address to Congress.

Newman said he is “still in awe” of the U.S. military and its defeat of Japan and Nazi Germany in 1945.

“When you think what our country did in four years, it’s amazing,” he said.

Sarpas said she intends to repeat the ceremony next year and asked for the names of any other Pearl Harbor personnel in the Tri-State to be sent to her for inclusion.

She thanked the crowd for their turnout.

“Please don’t forget Pearl Harbor and the over 2 million who have died in service for our country, from the revolution to today,” she said. “Freedom isn’t free.”

For a gallery of photos from the event, see Saturday’s Focus page.