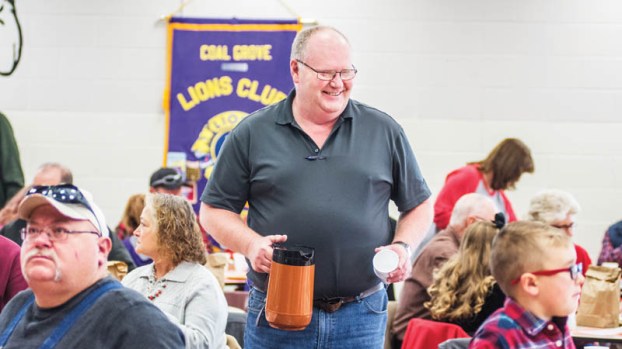 Hundreds turn out for pancakes

COAL GROVE — The Coal Grove Lions Club has been organizing the annual Christmas pancake breakfast for about 10 years, and vice president Tom Carey said the goal is to give the community a chance to come together.

“The goal is to make a close-knit event,” he said.

Carey said he expected, by the time Saturday’s breakfast was over, the group would have served more than 800 people, who packed into Dawson-Bryant High School for the morning festivities.

“This is our biggest yet,” he said. “It grows every year.”

In addition to the pancakes and sausage, Santa Claus was on hand for photos, treats were handed out to children and balloons were distributed.

“It’s all free of charge,” Carey said of the family-friendly event, which was put on as a joint venture with the Coal Grove Betterment Club.

Carey said the Lions have also been involved in charity projects for the holiday season, giving out about 100 Christmas dinner and dessert packages to needy families, an effort than began four years ago.

“They’re free and ready to take,” he said. “All you have to do is cook them.”

He said the Lions’ junior members, the Leos, have also been doing a clothing drive and have helped 150 families.

Carey said the group is grateful for the revenue they receive from the community from fundraising events, such as a 5K run and a gold scramble the group organizes.

“The community knows that, when they support us, the money goes right back into the community,” he said.

Flu season off to an early start