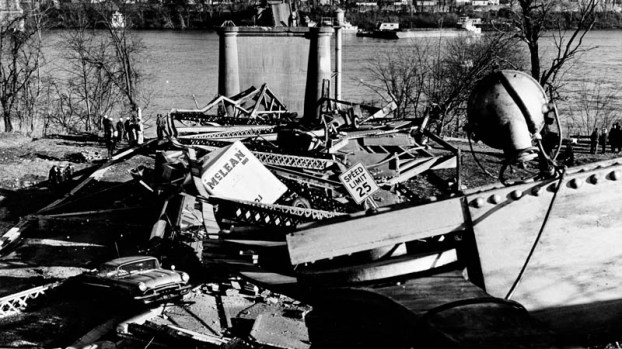 The wreckage of the Silver Bridge event is seen in the Ohio River at Point Pleasant, West Virginia on Dec. 16, 1967, a day after the span collapsed, claiming 46 lives. (Maurice Hamill Collection/ West Virginia State Archives)

50th anniversary of Silver Bridge collapse to be commemorated

The service will take place on Sixth Street at 11 a.m. and is being organized by the West Virginia Department of Transportation.

On Dec. 15, 1967, the 39-year-old bridge, which took its unofficial name from its aluminum paint and connected Point Pleasant to Gallia County, Ohio, collapsed into the river during rush hour traffic in the Christmas season, claiming the lives of 46 people.

The failure of the suspension span, which routed U.S. 35 over the river, was caused by a one-inch defect in a faulty eyebar joint on the Ohio side.

Once the joint failed, a chain reaction took place and the deck and roadway flipped, dumping the 31 vehicles and commuters into the river, followed by the collapse of the structure itself. Only six vehicles on the bridge at the time were spared the plunge into the cold Ohio River below.

Investigators said that vibrations from heavy traffic at the time, including five tractor trailers, led to the joint’s failure.

Of the victims, 21 were from West Virginia, 22 were from Ohio, two were from North Carolina and one was from Virginia. Two bodies were never found in the recovery efforts, which spanned into January, as divers brought the cars to the surface.

The names of the 46 will be read during the ceremony by Point Pleasant’s mayor, Brian Billings. Speakers will include West Virginia Gov. Jim Justice, U.S. Rep. Evan Jenkins, R-West Virginia, West Virginia Dept. of Transportation Secretary Tom Smith, U.S. Federal Highway Administration acting director Brandye Hendrickson and representatives from U.S. Sens. Joe Manchin, D-West Virginia, and Shelley Moore Capito, R-West Virginia. A memorial mural will be unveiled during the ceremony and the song “The Silver Bridge” will be performed by Steve Chapman. A tent will provide shelter from cold weather and chairs will be available.

A reception, free to the public, will take place at Trinity United Methodist Church, located at 615 Viand Street after the commemoration. An additional observance, set for 5 p.m., the time of the collapse, will take place at the bridge memorial on Sixth Street.

The Bossard Memorial Library in Gallipolis will also host a memorial service at 5:30  p.m.

Written accounts of the day, along with photos and a screen projection will be on display.

The Silver Bridge disaster led to a system of federal bridge inspections being implemented. The event is also the basis for several exhibits at the Point Pleasant River Museum.

A replacement span, the Silver Memorial Bridge, was completed in 1969 and opened on the two-year anniversary of the disaster.