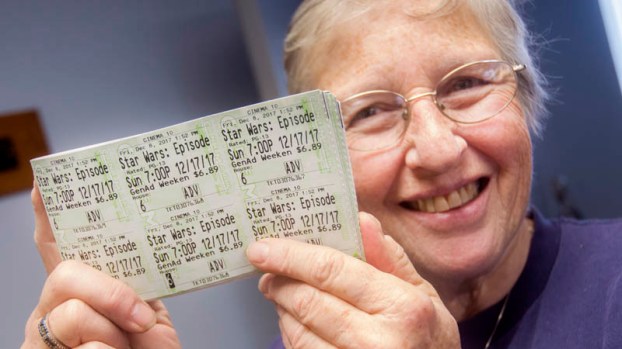 The news went out on Facebook. Ironton TV and movie writer Mickey Fisher had bought 150 tickets for a Sunday showing of Star Wars: The Last Jedi at the Ashland Cinemark Cinema 10 and he was giving them away.

All anyone had to do to scoop up some tickets was donate a couple cans of food to Harvest for the Hungry in Ironton.

On Wednesday morning, mixed in with people picking up groceries were people exchanging cans of food for tickets.

“It’s been pretty steady,” said Diane Porter, the director of Harvest for the Hungry, on Wednesday morning.

She knows Fisher and his family because she was in the same class at Ironton High School with Fisher’s parents.

Fisher, who is currently writing the sci-fi TV series, Reverie, for NBC, is a 1991 IHS graduate. He started off making small independent films “The King of Iron Town” and “Summer Nuts” before moving to California from New York in 2011. He gained national recognition for writing the TV series “Extant” which featured actress Halle Berry and was produced by Stephen Spielberg’s production company, Amblin Entertainment. It ran two seasons on CBS.

Fisher, an admitted Star Wars nerd, said they started doing a family and friends screening every time a Star Wars film hit the theaters and last year, when Star Wars: Rogue One came out, he decided to expand and do some good for Harvest for the Hungry Food Pantry.

“That way it would benefit the community too,” he said from his office at Universal Studios where the season finale of Reverie was being filmed. “I’ve known Diane for years and the food pantry does great work. And, especially at this time of year, it is important to give them all the support we can. I would like to thank them for the work they do and this is our way to do it. And may the Force be with them.”

Porter said that last year, people made the donations at the theater to get tickets. This year, the food donations were done at the food pantry.

“Since we had the information ahead of time, we opened it up for people to bring food in (Wednesday),” Porter said. “And then depending how it goes, we may open it up for another day.”

Porter said the best way to check out if tickets are still available is through their Facebook page, Harvest for the Hungry Food Pantry.

One person there to make a donation was Gina Boggs of Ironton, who saw it on Facebook.

“It’s a great opportunity to give and it’s for a great cause,” she said. “And you get free tickets for a new movie, you can’t beat that.”

She said it was a good gimmick.

“I hope I’m not the only one who saw this on Facebook,” Boggs said. “I’m pretty excited to see the new Star Wars and to help out.”

Porter said that the ticket exchange always helps to stock the shelves.

“And this year, we asked for specific things, peanut butter and green beans,” Porter said. “We’re not out of peanut butter but we run out pretty quickly and it is hard to get it through the USDA. Green beans, we are out of those.”

She added the support of Fisher is great.