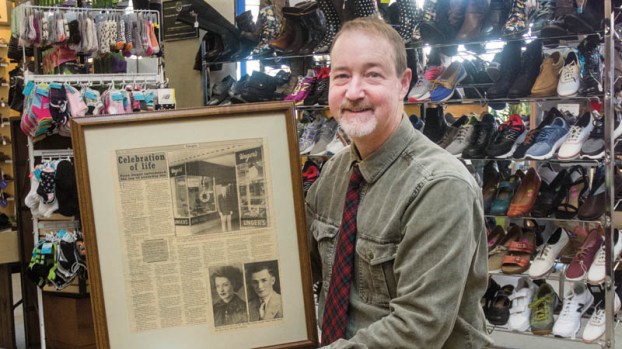 Some 80 years ago, a young man grew tired of working at the Shelby Shoe Factory on Second Street in Ironton and set up a little shoe store in Gabler’s Department Store in downtown Ironton.

When Gene Unger started his business in 1937 in a far right-hand corner of the store, he had no way of knowing that he would meet his future wife, Bonnie, at that same store and then leave that store to set up his own business, Unger’s Shoes, just a couple blocks away that would be in business 80 years later.

“Dad was at Gabler’s until the Japanese bombed Pearl Harbor. In February 1942, he enlisted in the U.S. Army, he was in the anti-aircraft artillery,” said Gene’s son, Joe, who now runs the store. The older Unger got out in 1945 and Gabler’s offered him the space back. “He said ‘No, I think I would like to start out on my own.’”

Gene Unger got a storefront across from the JC Penney store, which is now the Ironton City Center, and opened up Gene Unger’s Shoe Store in February 1946 next to the GE store on the corner of Vernon and Third Streets. Gene and Bonnie had married in 1938 and she did the books and stayed home to raise their five children, Francie, Bonnie, Mary, Theresa and Joe.

Joe Unger got his start at the shop in 1974, at age 14, doing whatever needed to be done around the shop.

“I’d sweep the vestibule, go to the post office, empty garbage, whatever there was to be done,” Joe said. After getting paid, he would head down to Kresge’s and buy model to build with his wages.

He graduated from Ohio University in 1982 and then Ball State University, where he went to study how to prescriptions for shoe orthodics from doctors, in 1982. He returned to the family store in 1984.

Shortly after that, the store next door went out of business and the Ungers bought the store to combine it into one big space. They tore down a dividing wall and the door to Unger’s was taken out and windows put in place.

“It was a golden opportunity,” Joe Unger said. “We kept the door on the corner and block glass because it was classic art deco.”

Joe estimates that his father probably fitted a quarter million people for shoes in his decades in the shoe business. And that is a trend that continues to this day. When a customer comes in for a pair of shoes or boots, they sit down, get their feet measured and get a recommendation for a proper fitting shoe.

“It’s a time capsule experience, shoe stores the way they are supposed to be. We carry on that classic, full-service experience my father established,” Joe said. “You are going to get the right size and the right width before you leave. We have continued that caliber of fitting expertise.”

And Unger’s has been in business for so long that they are now serving the fourth or fifth generation of families.

“When we fit children with their first pair of walking shoes, the grandmother comes in with the mother and the baby, and they will say to me ‘Joe, you know your father fitted me and my first baby shoes. And he fitted my daughter. And now, you are fitting my granddaughter.’ So we have loyalty to those families that have trusted us for so many years.”