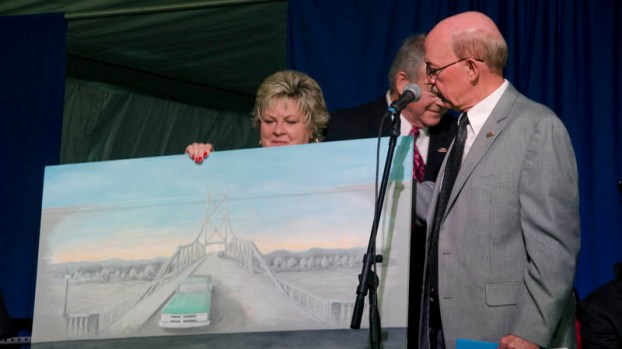 Point Pleasant Mayor Brian Billings unveils artwork for a mural, which will be located at the site of the Silver Bridge collapse. 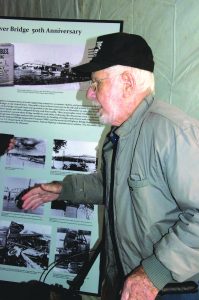 The Tribune/Heath Harrison
Retired truck driver William Edmundson, 88, was one of only nine people to survive the Dec. 15, 1967 collapse of the Silver Bridge into the Ohio River. The disaster claimed 46 lives.

POINT PLEASANT, WEST VIRGINIA — “How many times did I cross that span that testified once to the genius of man?” Steve and Anita Chapman sang. “She was part of our families, a friend to us all. But we never thought she would fall. We never thought that at all.”

The couple, natives of Point Pleasant and now living in Nashville, performed the song they wrote about the Dec. 15, 1967 collapse of Silver Bridge at a ceremony on Friday, to mark the 50th anniversary of the disaster, which is still mourned by many in the region.

The familiar span, built in 1928 and connecting Point Pleasant with Gallia County, Ohio, fell into the Ohio River during rush hour in the Christmas season, claiming 46 lives.

The collapse of the bridge was blamed on the failure of a single eyebar joint in the suspension span, which triggered a chain reaction, first flipping the roadway and dumping commuters into the river, followed by the fall of the bridge structure.

“They didn’t have a chance,” Jack Fowler, the director of the Point Pleasant River Museum, told The Tribune when recounting the disaster.

U.S. Sen. Joe Manchin, D-West Virginia, who spoke at the ceremony asked “How do you make something positive from a tragedy?”

Manchin spoke of the national attention the disaster received and how it led Congress to push for the first federal system of bridge inspections.

“Our vigilance on bridge safety must never waiver,” Manchin said, and called for both parties to “come together” to pass needed infrastructure bills. “We talk about building new things, but when you don’t take care of what you have — My goodness.”

She said the tragedy was connected with two things that had long had a place of pride for Point Pleasant – the bridge and the Ohio River, and that the disaster had showed the strength of the community.

“We rallied together to help,” she said. “In 1967, we pulled together as a community to be compassionate, to shed tears.”

U.S. Rep. Evan Jenkins, R-West Virginia, was unable to attend the ceremony, but a spokesman from his office read a statement.

Jenkins recalled the story of Shirley Wood, a beautician from the area, who was about to cross the bridge when she felt a shake.

“She first though a barge had struck the bridge,” Jenkins wrote. “She put the car into reverse and the bridge broke right in front of her tire. No one who witnessed this horrific event can ever forget it.”

The keynote speaker for the ceremony was Brandye Hendrickson, the acting director for the U.S. Federal Highway Administration.

She said the disaster affected the entire country.

“We want to express our thoughts and prayers to family members who are still here,” she said. “The nationwide attention to this collapse changed the way we approach bridge safety.”

She said millions of Americans, who cross more than 615,000 bridges in the country are safe as a result of the changes, which required the federal government to team up with states for annual mandatory inspections.

“What today seems obvious was groundbreaking back then,” she said.

In addition to families of the victims, the ceremony also drew one of its few survivors.

William Edmundson, 88, was  one of only  nine people who lived after falling into the river. He spoke with reporters after the ceremony.

Edmundson was a truck driver and was returning to Winston-Salem, N.C. from Detroit when he crossed the span, something he did several times a week on the job.

He said he recalled the bridge beginning to shake, then tilting to the right, as the deck dumped the vehicles and commuters into the river.

Edmundson was thrown through the window of his cab.

“I floated downstream,” he said. He was pulled from the water by workers on a barge, near where the Kanawha River meets the Ohio.

He was taken to a local hospital.

“I busted my arm,” he said of his injuries, which also included a few cuts. “The Good Lord saved me.”

The ceremony also featured the unveiling of a mural of the bridge, which will be located on Sixth Street, the site of the former span’s approach.

“It will seem like you are driving up onto the Silver Bridge,” Randy Damron, of the West Virginia Department of Transportation, said of its location on the wall facing the river.

Following the speakers, Brian Billings, the mayor of Point Pleasant read the names of the dead and a bell was tolled for each person.

The victims came from four states, with 21 from West Virginia and 22 from Ohio. They ranged in age from one to 81 years old and many families lost multiple members.

“46 precious souls,” Billings said. “We remember those who were lost.”

New water payment system going well The Ironton City Council took no actions on Thursday night with most of the... read more