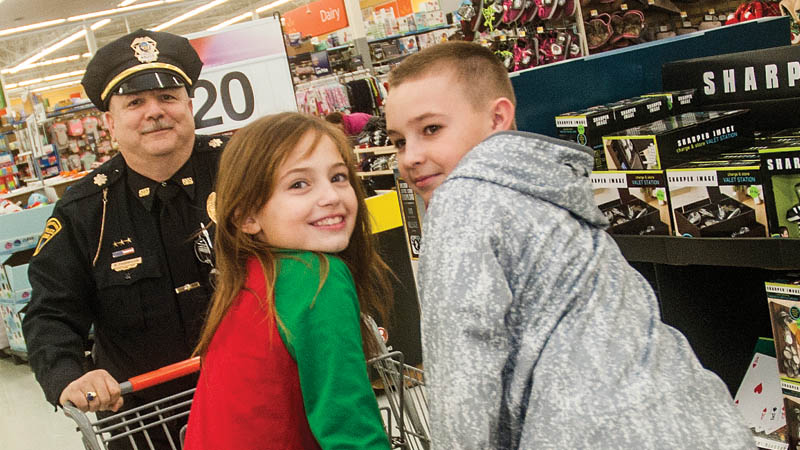 Nine-year-old Emily Lewis and big brother Blaze Perry, 12, get a ride from Officer Randy Thompson during the annual Shop with a Cop event Monday at South Point Walmart.

Shop with a Cop provides for 48 children this year

SOUTH POINT — Dozens of kids in Lawrence County will have a merrier Christmas this year, thanks to the efforts of law enforcement and donors to an annual Christmas initiative.

Led by Sheriff Jeff Lawless, the officers met at the store’s garden center, where they were assigned a child to take shopping.

They started with clothing, bedding supplies and other necessities, before wrapping up at the store’s toy section.

Lawless said the program has been going on for about a decade.

“It puts a smile on kids’ faces,” he said of the families, referred to the program for their economic needs. “And it provides much-needed clothing, helps the children and takes stress off of the parents.”

Lawless said it also helps the children to see the role police can serve.

“It shows the kids, whose homes we might come to under circumstances that aren’t the best that we’re good people,” he said.

One of those taking children around the store was Randy Thompson, who is currently serving as temporary chief of Chesapeake’s police department.

“My kids had a blast tonight,” he said of the two he was assigned to. “It really is a fun thing for them to do.”

Chris Smith, of the Ohio State Highway Patrol, said the effort was paid for with funds leftover from last year, as well as community donations, and provided for 48 children this year.

He said, after the shopping, the families were provided with a gift basket and the children were given a “goodie bag,” then they were taken to Ponderosa for dinner. The meal was paid for by donations from City National Bank and Hall Funeral Home.

Smith said the shopping trip was sponsored through several sizeable donations, including $10,000 from Spectrum Outreach, $500 from Robin Fowler of State Farm Insurance, $1,500 from Dynegy and a $500 anonymous donation form a “Secret Santa.”