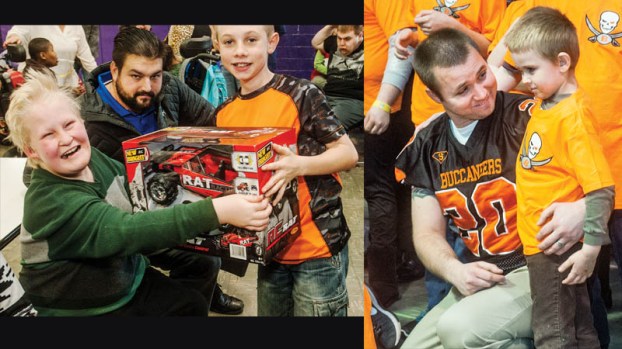 Students at Open Door School in Ironton dismissed for the holidays on Thursday, but, before, leaving, they were treated to a Christmas party.

Principal Kendra Heim said the festivities came about as the result of a phone call.

“The River Cities Buccaneers contacted us,” she said. “They wanted to do a special Christmas for all the students. They did fundraisers and asked for donations and came up with about $4,000.”

Heim said the event included a pizza party, cake, pictures with Santa and a character from the “Trolls” movie and every students got a Buccaneers shirt.

“This is our first year,” she said. “The kids are just ecstatic.”

Open Door School has 64 students and serves those with developmental disabilities between ages six and 21.

In addition to the football players from the semi-professional league, Ironton Mayor Katrina Keith, deputies from the Lawrence County Sheriff’s Office and officers from the Ironton Police Department were on hand.

“We’re just here to be seen by the kids,” Deputy John Chapman said.

Buccaneers owner Michael Payne said he and player Jesse Carmon had the idea of doing the party.

“My great-grandfather was a volunteer here for 18 years and his wife works here,” he said. “It has a special place in our hearts.”