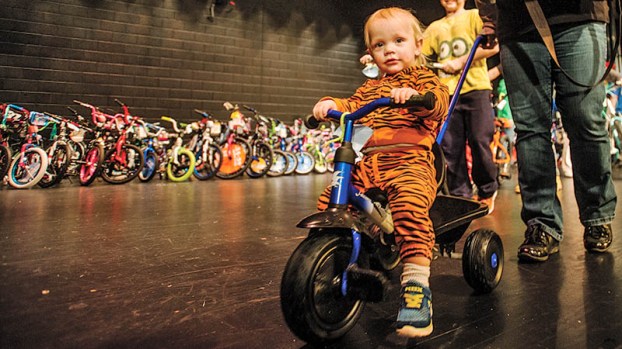 One and a half-year-old James Ford receives a little help from his mother, Andrea, during the annual Christmas Bike Giveaway event at Ironton High School auditorium. Over 200 bikes were given away.

In what is becoming a long-time holiday tradition, John Dickess and Don Schwartz held their Lawrence County Christmas Bike Giveaway on Saturday.

“We gave away 185 bikes this year,” said Schwartz, the general manager of the Ironton Advance Auto Parts.

While they gave away a lot of bikes this year, it isn’t the most. A couple of years ago, they had 500 bikes to distribute to needy kids.

“Money didn’t come in as strong this year,” Dickess, is the owner of Dickess Auto Repair, said.

“It’s not that we’re disappointed,” said Schwartz. “A lot of kids got bikes and they were happy about that.”

The pair started giving away bikes in 2010. The staff at Advance Auto Parts bought two bikes to give away at Christmas.

“John came in and said ‘You need more bikes to give away,’” Schwartz said. “His crew bought two bikes. A customer came in and said he’d put $10 in for a bike. Then the newspaper got a hold of it. So, we gave away 64 bikes that year.”

Although it is a lot of effort to collect bikes and raise donations, Dickess said that it is a community effort.

“We have people come in the shop and say ‘Are you going to do that again this year, we want to donate money towards it,’” he said, adding there are several businesses that also donate funds. “And you are helping a lot of kids, so that makes it worthwhile. It’s the public out there that wants us to do this, without them we couldn’t do any of this.”

“Every dime of this comes from the community,” Dickess said.

Both men agree that is seeing the kids get the bike is the best part.

“We are dealing with a lot of families in need that probably wouldn’t get a Christmas,” Schwartz said. “And the kids are probably more appreciative than anyone you will ever see. Everyone fondly remembers their first bike.”

Schwartz said it is often one child that makes the event for him.

“There was one boy, he was so excited and had such a big smile on his face. He wasn’t going to get off that bicycle,” he said. “It is a lot of work, it is a lot of things we have to do. You see that one kid smiling and it makes it all worthwhile.”

Schwartz and Dickess  thanked the people of Lawrence County for all the donations that makes this possible every year.

“They donate their money and their time, it isn’t possible without them or the businesses that donate,” Schwartz said. “Without them we couldn’t do it. We want to thank them for letting us do this.”