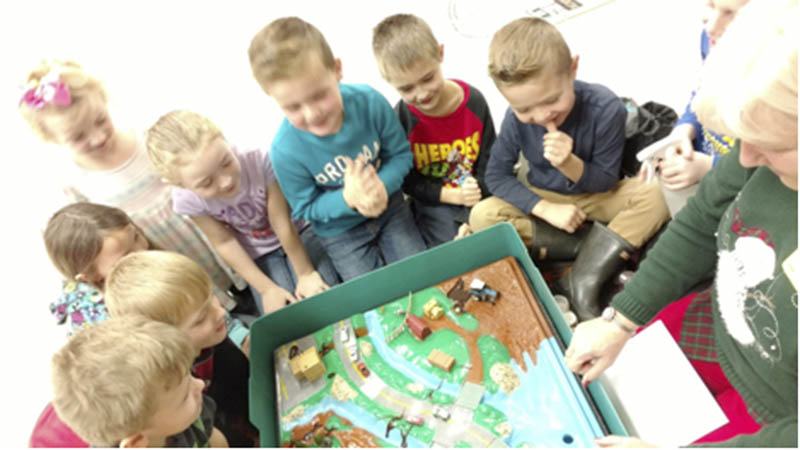 Using an Enviroscape, Lawrence Soil and Water Conservation District Urban/Education Specialist Kim Carrico showed Kindergarten students from Symmes Valley Elementary and third grade students from South Point Elementary that chemicals poured into the ground will eventually make their way into the area’s watersheds, through ditches, creeks, streams and, eventually, into the Ohio River.

The Enviroscape is a large watershed model with a simulated landscape of farms, factories, a golf course and residential subdivisions. Crisscrossing the communities are creeks and rivers.

Carrico led students in discussing what sorts of chemicals could be applied to the ground in yards, on farms and around factories that could seep into the soil and then into the waterways, things such as crop fertilizer, pesticides, herbicides and motor oil.

Carrico asked the students to think about all those going into the drinking water.  Colored Kool-aid representing fertilizer, pesticides and herbicides, salt and a brown liquid simulating cow manure oozed its way across the Enviroscape.

The chemicals finally made its way into the river.

The students were asked to think of some things that they could do to help prevent this from happening.