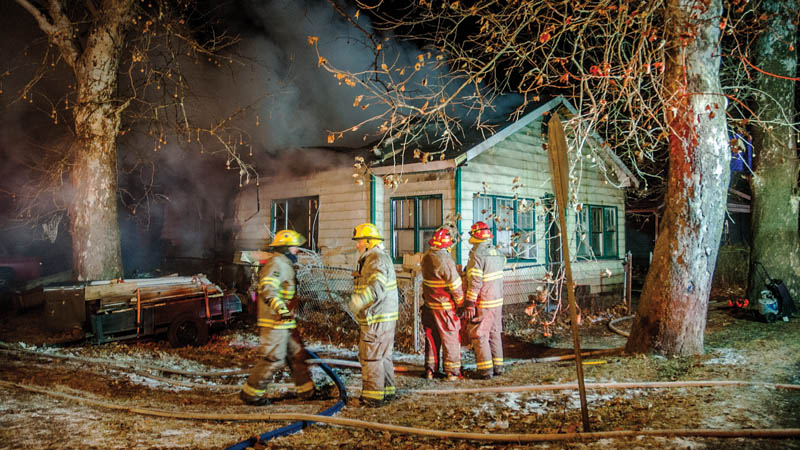 Ironton firefighters stand outside the home located at 1324 First Street, behind Spriggs Distributing, Monday evening as smoke bellows from the rooftop. Crews were called on scene around 3:45 p.m.

The Ironton Fire Department had to battle the elements to put out a fire on Monday.

“It’s a total loss,” IFD Captain Joe Stevens said, adding that both the way the house was constructed and the subfreezing weather made it difficult to put the fire out. Firefighters were on the scene until 2 a.m. on Tuesday morning and all available firefighters were called out.

“It’s an older home and it had been added on to and remodeled so many times that there were a lot of void spaces between the ceiling and the attic,” Stevens said, adding the fire stayed hidden in the void spaces and it made it difficult to put out and then, it got underneath the house and the floors.

“The initial fire wasn’t hard to knock down but with the void places, we spent hours pulling ceiling and tearing down walls to find where the fire was hiding from us,” Stevens said.

He said the weather was the toughest part.

“Once we started spraying water, it froze everything,” Stevens said. “Our guys were literally covered with ice. It was pretty chilly. If it had all been in daytime, it might have been easier”

Once it got dark and cold, it was difficult for the firefighters to walk around with all their gear on when it’s frozen.

The firefighters had to work in shifts due to the cold. With no place close by for the firefighters to get warmed up, they would rotate going back to the fire station to get dry clothes and gear.

“After the first several hours, two or three guys would go. Then they’d come back and a couple of the others would go to get warmed up,” Stevens said.

One firefighter fell but he wasn’t injured to the point he had to stop working.

Lawrence County EMS was on scene to provide help.