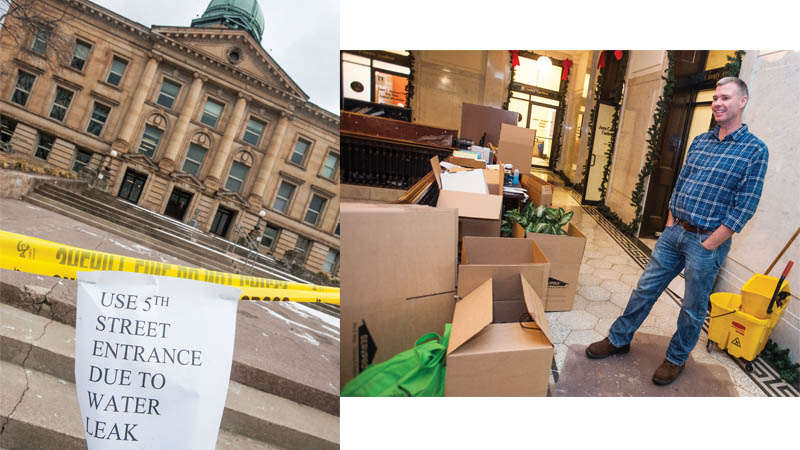 (LEFT) Caution tape and signs tell of a water break greet potential visitors to the entrance of the Lawrence County Courthouse following the New Year. Employees came into the courthouse to find a burst pipe on Wednesday. (RIGHT) County Engineer Patrick Lightly looks over the stacks of boxes, files, office furniture and other equipment, in the second floor lobby area, Thursday morning. Staff returned to work Wednesday to find pipes had burst inside the Lawrence County Courthouse causing damage to three floors of offices.

A leak in a pipe has damaged several offices in the Lawrence County Courthouse and closed one of the main entrances.

“There was a water line in the attic that broke and then rained down three floors below it,” said chief deputy auditor Chris Kline. “We don’t know why it broke. It could have frozen. But it is old and could have just gotten a pinhole bore through it.”

On Thursday morning, ServePro workers were tossing bags of ceiling tiles out windows of what was the third floor office of what used to be the Educational Service Center to the ground below before they put them into vans to be hauled away. The courthouse entrance on the Fourth Street side was closed off as was the staircase on that side. Dozens of fans were in the lobby waiting for office spaces to be cleared before being put into use.

The water ran from the attic all the way to the first floor men’s bathroom and the OSU Extension office was closed as workers cleaned up the mess. At one point, courthouse workers watched as water ran through the decorative molding on the second floor ceiling.

In their office space, water was still dripping through the ceiling into trashcans.

Patrick Leighty said they had worked on Tuesday and everything was normal when they left. The next day, the office was flooded.

“Right now, we are trying to figure out what all we can do,” he said. “The insurance adjusters are here. We have a lot of equipment that was damaged. We’re trying to see what we can get replaced.”

One of their large printers had just come in two weeks ago. Their computer server had gotten wet too, but Leighty said most of the files were backed up off site.

The paper files that had gotten soaked would be dried and separated.

Leighty said they are going to set up an office at the county maintainence garage until their office was back in working order.

“It will give us a little more space to work,” he said.

Kline said the work to repair the damage to the courthouse will be done in stages.

Right now, ServePro set up fans to blow the water from the carpet into the air and then the moisture will be sucked out of the building by an extractor set up in a truck outside the courthouse.

“Those will have to run for three to five days,” Kline said. “Then we will see what kind of damage there is, what dries out, what shrinks up, what cracks, what doesn’t.”

He said they will try to salvage what they can but in many cases, carpeting will have to be taken out and replaced.

“It’s a wait and see situation,” Kline said. “The insurance adjuster was here (on Thursday) and we are waiting to hear back what their estimate is and what they think is going on with it.”