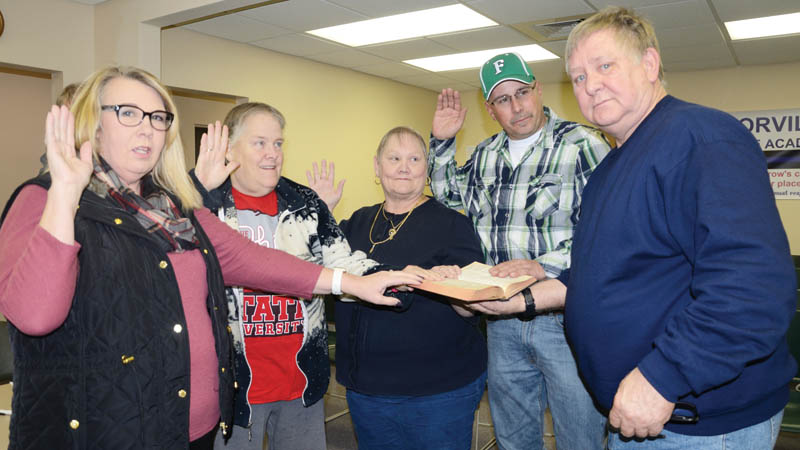 New members of Proctorville’s village council, from left, Pamela Legg, Brenda Chapman, Margie Whitley and Jerry Thomas, are given the oath of office by Mayor Rick Dunfee at the organizational meeting at village hall on Thursday.

PROCTORVILLE — An organizational meeting took place on Thursday to swear in four members of village council and to plan business for the coming year in Proctorville.

Mayor Rick Dunfee gave the oath of office to Pamela Legg, Jerry Thomas, Margie Whitley and Brenda Chapman to kick off the proceedings.

Whitley and Legg are newcomers to the council, while Chapman and Thomas have served on the body in the past.

Legg said, while this her first term as a council member, she is well prepared for the job.

“I’ve worked for the village for 20 years, so I’m familiar with things,” she said.

Thomas said this will be his second time on the council.

“I served eight years ago,” he said.

While Chapman said this will be her fourth time serving.

“We just need to keep up the good work and keep the village clean,” she said of her goals.

Dunfee commended the last council for its work and he said the work the new council will do is critical to the village.

“I hope we have a good year,” he said. “This may be one of our most challenging. It’s going to be a tight year.”

Dunfee said the village has seen a decline in revenue coming in, due, in part, to a large number of abandoned homes within the village.

“Survival,” fiscal officer Darrell Legg said, when asked what the goal of the council will be for the coming year.

He agreed with Dunfee on the need to address the drop in revenue.

“When I was a kid, every block here was full of houses,” he said. “ I would be hard pressed to say how many we’ve lost. And with that, you lose people, revenue and taxes.”

He told the new members that the key is to continue with what he said had been positive steps in the last few years.

“We need to stay positive and continue building on what we’ve been doing,” Legg said. “I look forward to working with you all.”

Whitley agreed with his assessment.

“Our first priority is that Proctorville needs money,” she said.

In addition to the revenue issues, Dunfee said a major issue for the village will be police funding.

Last month, the council voted to send a 2-mill property tax levy to the ballot.

Dunfee asked the council to think of ways to promote the levy, which could provide the village with 24-hour, 7-day police service.

• Chose Pamela Legg as president of the council. Both she and member Dale Burcham were nominated. However, after consideration, Burcham withdrew his name, stating that he wanted to see a unanimous vote in support of Legg.

• Voted to pay $6,000 for fire protection for the village. Dunfee said this is done every year and the village has paid $7,000 in the past, but had to drop the amount due to revenue decreases.

• Chose Chapman and Thomas to serve on the Firefighter Dependent Fund board. Dunfee said the board has never had to meet, as no firefighters have been killed in the line of duty.

In addition to the council members, two representatives from the fire department will serve on the board.

• Voted to set council meeting times for the third Thursday of each month, which has been the case in the past. However, the meetings will now take place an hour earlier and will begin at 6 p.m.