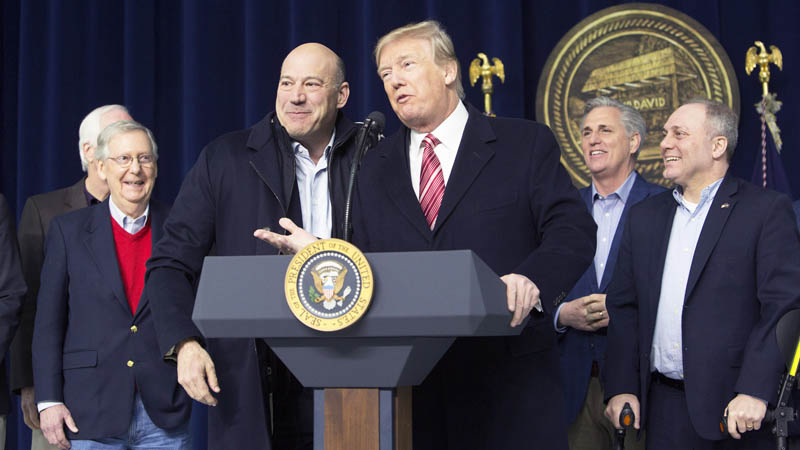 President Donald Trump and his Chief Economic Advisor, Gary Cohn, affirm their support for each other at Camp David after holding meetings with staff, members of his cabinet and Republican members of Congress to discuss the Republican legislative agenda for 2018, in Thurmont, Md., on Saturday, Jan. 6, 2018. (Chris Kleponis/Sipa USA/TNS)

THURMONT, Md. (AP) — Emerging from closed-door meetings with Republican leaders, President Donald Trump on Saturday held out the prospect of a deal with Democrats on the fate of young immigrants brought to the country illegally as children but appeared to put a welfare system overhaul — once a top White House priority — on the back burner.

Trump spent much of Friday and Saturday morning hashing out his 2018 agenda with GOP House and Senate leaders, top White House aides and select Cabinet members at the presidential retreat at Camp David. He described the sessions as “incredible” and “perhaps transformative in certain ways.”

A long list of high-stakes topics were on the agenda, from national security and infrastructure to the budget and 2018 midterm election strategy. Though Democrats were not included in the discussions, the leaders — some dressed casually in jeans, khakis and sweaters — said they were optimistic that more Democrats would be working with Republicans.

“We hope that 2018’ll be a year of more bipartisan cooperation,” Senate Majority Leader Mitch McConnell told reporters, predicting a “significant number of Democrats” would be interested in supporting Trump’s agenda.

It’s a reflection of reality: Republicans hold a razor-thin majority in the Senate and will need Democrats’ support to push through most legislation. It’s unclear, however, the extent to which Trump is willing to work with Democrats to achieve that goal.

Trump, for instance, declared Saturday that he will not sign legislation protecting hundreds of thousands of young people who were brought to the U.S. illegally as children unless Congress agrees to fund his promised border wall as well as overhaul the legal immigration system.

Trump last year ended the Obama-era Deferred Action for Childhood Arrivals program, which shielded more than 700,000 people from deportation and gave then the right to work legally in the country, and gave Congress until March to find a fix.

Trump said any deal must stop immigrants from being able to sponsor their extended family members and must end the diversity visa lottery, which draws immigrants from under-represented parts of a world . That’s in addition to funding for the southern border wall, a deeply unpopular idea among Democrats.

The administration on Friday unveiled a 10-year, $18 billion request for the wall that roiled the immigration talks and infuriated Democrats who’ve spent months in negotiations, increasing the prospect of a government shutdown.

But Trump appeared oblivious to the anger on Saturday. “We hope that we’re going to be able to work out an arrangement with the Democrats,” he said. “It’s something, certainly, that I’d like to see happen.”

Louisiana Rep. Steve Scalise, the House majority whip, also expressed guarded optimism when he returned to his state after the retreat. “For a few weeks now it seems like there’s the ability to get an agreement reached but none has been finalized yet,” he said of the effort to protect the young immigrants who came under President Barack Obama’s program. “I think the framework is there and the president is fully engaged.”

Trump appeared Saturday to back away from efforts to overhaul the welfare system, which just weeks ago had been identified as a top two legislative priorities, along with a massive infrastructure investment plan.

McConnell had argued that welfare reform was a no-go given Democratic opposition. And Trump appeared to have come around.

“It’s a subject that’s very dear to our heart,” Trump said. “We’ll try and do something in a bipartisan way. Otherwise, we’ll be holding it for a little bit later.”

Republicans are eager to build on the victory achieved late last year with the overhaul of the nation’s tax code.

But before moving on to infrastructure and other items, Trump and his GOP allies first must navigate a tricky landscape of leftover legislation from last year that promises to test party unity in the coming weeks.

The need to work with Democrats on a spending package, for instance, is sure to whip up opposition from many conservatives to a hoped-for catchall spending bill slated for next month.

Politics, too, were on the agenda, with talks about the midterm elections. Republicans are at risk of losing the majority they’ve held in the House since 2011, and could also lose seats in the Senate, though many more Democratic incumbents are up for re-election this year.

“I don’t see that happening,” he said, citing the stinging GOP loss last year in Alabama, where Democrats managed to win a seat in the Senate and Trump backed two losing candidates.