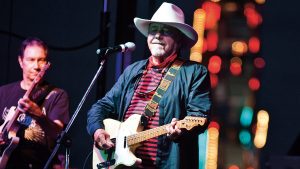 THE TRIBUNE/JESSICA ST JAMES
Bobby Bare during his performance at the 2014 Lawrence County Fair. The Pedro native premiered the video for his latest single, “I Drink,” on CMT and Roling Stone’s website on Tuesday.

NASHVILLE — Lawrence County native and Country Music Hall of Fame inductee Bobby Bare released the video to his latest single this week, which tackles the topisc of alcoholism and addiction.

Bare’s video for the song “I Drink” premiered Tuesday on Country Music Television and aired multiple times throughout the day and launched online on the country music section of Rolling Stone’s website, where it was described as “heart wrenching.”

“I Drink” is featured on Bare’s most recent album, the acclaimed “Things Change,” a collection of original material and covers, which was released last spring.

“’I Drink’ was written by one of my favorite songwriters, Mary Gauthier – she lived it,” Bare said in a news release. “It’s a heart-wrenching story of alcoholism and the effects it can have on a family. I am proud of the depiction of the song through this video and hope it will sincerely touch people. If you’re struggling, get help, it could save your family and your life. I recommend AA as a starting point.”

Bare, 82, is a Pedro native and is celebrating his 60th year in the music business. He enlisted songwriter Max T. Barnes to direct the clip, which was produced by Zach Farnum.

Tim McGraw and Blake Shelton have previously covered the track by Gauthier, who also penned “Mercy Now” on Bare’s album.

Gauthier, who has written about her battles with addiction, makes a cameo appearance in the clip, which illustrates the tragic effects of alcoholism on multiple generations of a family.

Bare’s role in the clip was described by the website Wide Open Country as “a reverse guardian angel of sorts. He’s the human embodiment of alcoholism, eager to snuff out the lives of his victims.”

Bare has a handful of live dates scheduled for 2018, including his first return to southern Ohio in a few years, set for April 27, when he will play a show at the Vern Riffe Center for the Arts in Portsmouth. The show, which also features Ricky Skaggs and others, will raise funds to benefit the flood wall mural project in the city.