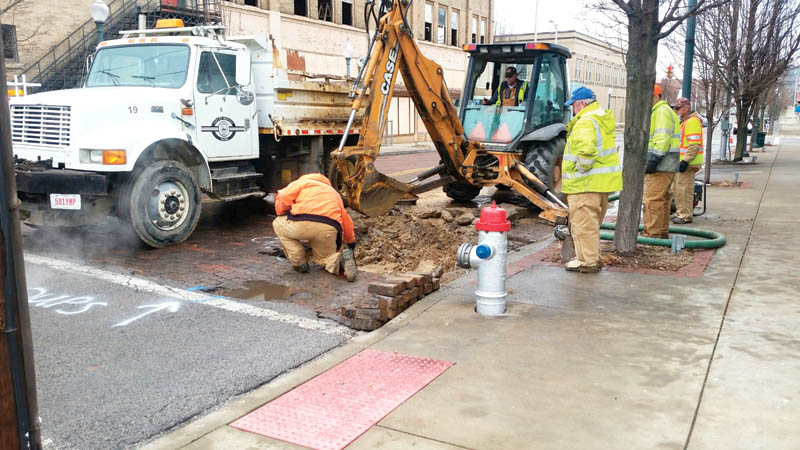 An Ironton City crew works on a water pipe break on the corner of Second and Vernon streets. There have been several water line broken to the ground fluctuating as the temperatures go from bitter cold to spring-like warm.

The city water department was out on Wednesday morning working on yet another water line break.

This one was on the corner of Second and Vernon streets.

“We have a pretty good-sized line leaking here. We’re trying to get it healed up before anything major happens,” said Brett Thomas, Public Service director, as a crew dug into the clay beneath the brick street. They also had to work on one on Mill Street.

“A lot of these are starting to pop because of the weather,” Thomas said. “Even with warmer weather we are not out of the woods. It is actually a little worse than if it stays cold, because of the thaw and the change in the ground.”

He said that as the barometer changes, the ground fluctuates which causes the pipes to burst.

“That’s what we are dealing with now, along with frozen meters. Those are thawing out and busting,” Thomas said.

The conditions were warmer than on Sunday, when a high-pressure water line on Third Street between Vernon and Park streets broke. Crews had to bundle up in heavy clothing to fix the pipe that was shooting water about six feet up in the air. Crews also had to fix a water line between Orchard Street between Thomas Street and Mimosa Lane. Crews spent around 16 hours in the frigid weather fixing the two pipes.

“The problem with those was the brutal temperatures on my guys,” Thomas said. “It was very brutal weather, especially working in water like that. It was a long night.”

He said he expects more lines to break.

“If the temperatures come up a few degrees and hover, you don’t see a lot of fluctuation,” Thomas said. “But if it goes from 60 degrees and then the next day it’s down to 15 degrees, it causes major trouble for the water department.”

Thomas recommended that people  let water faucets drip even though the temperatures have risen from 2 degrees last week to mid-60s on Wednesday.

“The reason why is that if there is any ice in their line or their meter is partially frozen, by letting it drip it helps with the thawing process and it won’t do any damage to the meter,” he said. “So, let the faucets drip until the thawing process is over with.”