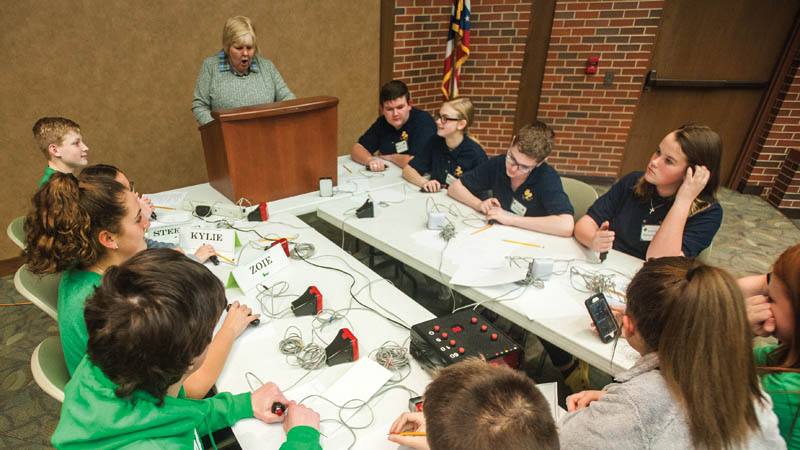 The Lawrence County middle school Quiz Bowl tournament took place on Wednesday at Ohio University Southern and the competition in the final rounds was as close as could be.

South Point defeated third place St. Joseph to enter the match with Fairland, who was undefeated in the double elimination tournament.

South Point quickly amassed a lead over their rival, so much so, that when it came time for the final lightning round of the match, they were so far ahead, 70-37 points,  that it was mathematically impossible for Fairland to catch up.

As a result, Fairland’s coach, Kara Speed, said they should end the match and declare South Point the winner.

But, since South Point had been defeated once earlier in the day, they needed to score a second win against Fairland in order to win the tournament.

“We have to beat them twice,” Kathy Floyd, the team’s coach, said.

The two teams faced off again, first taking part in the initial questioning where individuals buzz in to answer questions, followed by the alphabet round, where the teams work together to determine answers to a series of printed questions.

After these two segments of the match were completed, Fairland had a lead of 55-47, leaving the score close enough that either team could easily take the game in the lightning round.

With both teams on edge, Speed, who was one of the scorekeepers, advised both groups of students “to take a deep breath, relax and win.”

Following the final series of questions, Fairland maintained its lead, taking the match, 66-53, and winning the day’s event.

It was a double honor for Fairland, who had also been named the overall winner for the season, based on their earlier victories in individual school-to-school matches.

The two schools had established a bit of a rivalry this season, with South Point coming in second overall for the season.

“When we played them earlier, we ended up splitting the score,” Floyd said of their individual match.

Her team came in second at last year’s county tournament as well.

The Iron Master tournament, which features Quiz Bowl teams from the county’s high schools, will take place at Ohio University Southern on March 15, Julie Walters, the student services coordinator for the ESC, said.

In addition to Quiz Bowl, the ESC also organizes the county spelling bee, which takes place every December in the Ironton Municipal Court chambers and the county science fair, which is set for Feb. 1 at this year’s host school, Ironton Middle School.