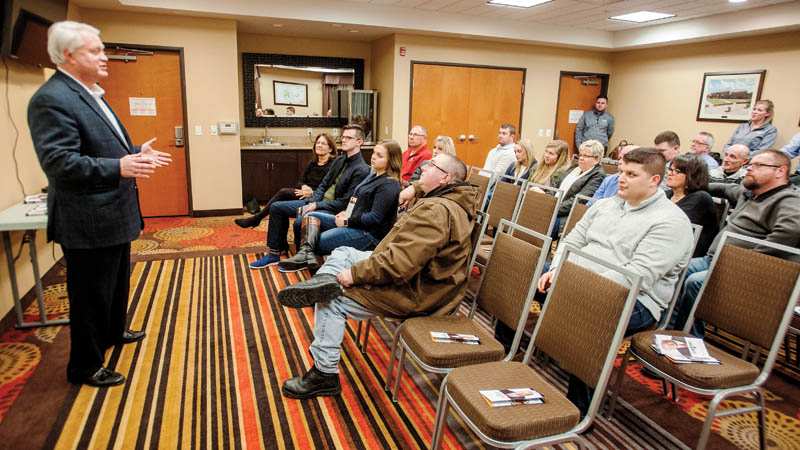 A Cleveland area businessman who hopes to unseat U.S. Sen. Sherrod Brown, D-Ohio, paid a visit to Ironton on Sunday to make his case to voters.

Mike Gibbons, an investment banker and founder of Brown Gibbons Lang & Company, has long been a supporter and donor of Republican candidates and causes, but his Senate bid is his first run for office.

“You’ve probably never heard of me and I like that,” Gibbons said of entry into campaigning, stating that he was against the idea of career politicians. “I do not believe our founders intended to create a political class to rule us.”

Gibbons’ visit to Ironton came on the heels of a shake-up in the Republican primary field a week earlier, when Ohio Treasurer Josh Mandel, Brown’s 2012 opponent, who was expected to face the senator in a rematch, unexpectedly dropped out of the race, citing a health issue his wife was battling.

Mandel’s departure put new attention on Gibbons and his candidacy, which he was eager to discuss with a crowd of supporters who braved the icy conditions to come to the Holiday Inn on Sunday.

He said the initial reports of his entry into the race described him “a wealthy Cleveland businessman” and were somewhat “insulting” to him, as “they don’t account for how I got here.”

Gibbons spoke of his upbringing under his grandfather and his father who worked waterproofing houses.

“I guarantee I’d be the only person in the Senate who would know how to finish a driveway,” he said.

He said his father lost his job when he was in college, and had to take a position at a car wash, which paid less.

“My dad loved his family enough that he would anything to make ends meet,” Gibbons said. “There are not enough Americans like that today.”

Gibbons touted his business success, stating he has worked with economic leaders from around the world. He said, unlike some who do not want to discuss their business dealings, he is proud of his path and eager to talk about it.

Gibbons said he was motivated to run after attending his son’s graduation and asking himself how he could give back to the country.

A supporter of President Donald Trump and former co-chair of his fundraising efforts in the state, Gibbons said he would work “to pass the Trump agenda” and would focus on strengthening the economy.

“Everybody is happier when the economy is thriving,” he said.

The candidate outlined his position on a number of issues.

Gibbons said he supports the tax overhaul passed by Republicans, but said it could be improved by making it more beneficial to small business owners.

He said he would oppose any restriction on gun ownership and wants to reduce the costs of health care.

To do this, he said competition in health care should be encouraged and the government should not be involved, other than making payments for promised commitments, such as to the elderly or those with disabilities, which he said he supports.

Gibbons also expressed his ire at the Great Society programs, which include Medicare, Medicaid and the Food stamp Act of 1964, signed into law by President Lyndon B. Johnson in the 1960s, as a social welfare effort to combat poverty.

“Poverty is worse than ever today,” Gibbons said, stating the programs have cost $20 trillion since their inception.

He said such programs have taken away the idea of “incentive.”

“They’ve been doing the same thing over and over and haven’t figured it out,” he said, adding that the founders did not “plan for government to rule our lives.”

Gibbons said he believed those who receive assistance should be required to work, if possible.

He also said he supports mandatory drug testing for those receiving funds.

“Any welfare recipient should be drug tested,” he said.

Brown, a favorite of labor unions and the progressive wing of his party, would face an opponent with distinct ideological differences if Gibbons is nominated.

Gibbons claimed Brown is “steeped in Marxism,” and said he looked forward to debating him on their differences.

Following his presentation, Gibbons took questions from the audience.

One of those was from Fayette Township Trustee Mike Finley, who brought up the issue of residents in Lawrence County who did not have water service.

Gibbons said he was surprised to learn that there were people in Ohio who did not have running water and focused on the need to improve infrastructure.

He said the country should borrow the money while interest rates are low, financing through bonds.

When you bought a house, did you have the money, or did you get a loan,” he said.

He said improvements are need for economic success.

He was also asked about the still-unfinished Chesapeake Bypass, and audience members said politicians have made promises in the past, but failed to follow through.

“When they get to Washington, they forget about us,” Dave Lucas said.

Gibbons said he would be the exception and made a vow to the room, which was met with applause.

“I’m going to make you a promise — if I’m elected, the first place I will come back to is Lawrence County,” he said.

While Gibbons has been enjoying a surge in coverage this week, the Republican field is still shaping up ahead of the Feb. 7 filing deadline for the primary.

Vance had earlier declined requests to enter the race.