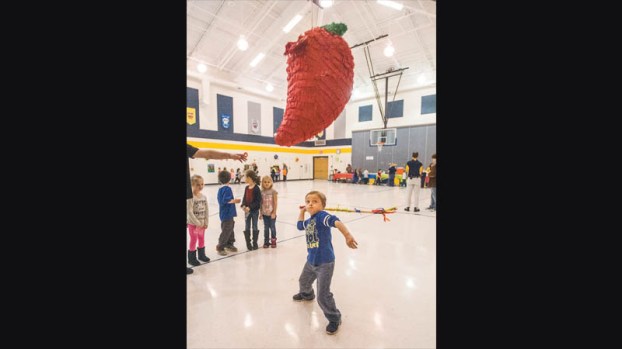 BURLINGTON — Students at Burlington Elementary got a reward for good behavior on Friday, as well as a chance to learn about the culture of a neighbor to the U.S.

A fiesta took place in the school’s gymnasium, as one of the school’s four-times-a-year good behavior parties.

The room was decked out in Mexican-themed decorations, including pepper-shaped piñatas and traditional clothing.

Jim Robinson, the school’s physical education teacher directed the children, from grades kindergarten through fifth, through several activity stations, which included the piñatas, pin-the-tail-on-the-donkey and a table with samples of Mexican food.

Principal Michael Clay said this was the school’s first attempt at doing a fiesta.

“It’s not just a reward, it’s very instructive about culture,” he said.

Clay said one of the parent volunteers was key to organizing the event.

Yadira Ortiz is the wife of Carlos Ortiz, who owns and runs Casa Grande Mexican Restaurant in Burlington. The couple’s two children are students at the school.

Clay said that Yadira Ortiz, who is part of the school’s parent association, prepared the food for event, which included deep-fried chips made from flour, desserts and samples of two drinks, made from a vanilla and rice mix and hibiscus.

“She brought in all the candies and made the drinks,” Clay said, noting that Ortiz ordered everything and the school reimbursed her.

He said the decorations hanging around the room, belonged to her.