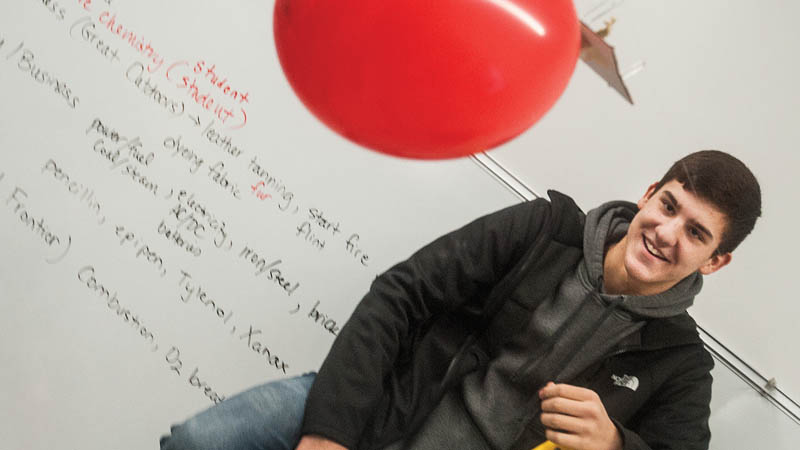 Dale Blankenship is pleased as his balloon projects, by the way of a fishing line, across the room during a design challenge at the STEM+M school.

SOUTH POINT — Classes may have been canceled across the region on Thursday, but students and faculty of Lawrence County’s newest public school still showed up in the evening to promote what their campus has to offer.

An informational meeting took place at the STEM+M Early College High School in South Point, giving parents and prospective students a chance to find out more about what is available by the programs there.

Director Jayshree Shah and lead teacher Alicia Spears met with parents and gave them an overview of the science, technology, engineering, math and medical education at the school. It currently has more than 50 students enrolled, beginning at the ninth grade level.

While the educators met with parents, potential students went to the room next door and took part in a design challenge and program put together by the school’s current students.

A string was stretched across the room and attendees were asked to construct a cable car from a balloon and other items.

“They’re trying to make it move from one end of the room to the other,” Olivia Sites, a student from South Point, said.

Trace Davis, of Chesapeake, who plans to enter the field of medicine, said the idea was for the constructions to sustain momentum.

“They can give it a little push and that’s it,” he said.

Both said they have enjoyed their experience at the school since it opened in August.

While the initial designs did not make it across the room, student Anna Holman, who was running the challenge, told them not to be discouraged.

“We’ll talk about what works and what doesn’t,” she said, announcing they would be given another few minutes to fine tune their creations. “The goal is to redesign.”

In addition to the design challenge, the students also played a video of the Green City, a project STEM+M students worked on and completed in the second nine weeks of classes.

They were asked to design a model of a sustainable city, which was energy efficient and climate controlled.

Attendees were also taught how to make an Oobleck, created from a mix from cornstarch and water and named after the Dr Seuss book “Bartholomew and the Oobleck.”

As a non-Newtonian fluid, the Oobleck has properties of both a liquid and a solid, depending on how much pressure is applied to it.

Parent Tammy Baily spoke of the experience her daughter, Leah Baily, has had at the school this year.

Only halfway through her ninth grade year of school, Leah has already completed all of her ninth grade work and will spend the remainder of the year doing 10th grade, she said.

In 10th grade, she will complete the remainder of high school requirements, wrapping up 12th grade by the end of that year, freeing her up for other opportunities in her junior year.

“Her last two years in high school, she’ll be shadowing doctors at Marshall University,” Tammy said, adding that by the time Leah graduates from the STEM+M school, she will have completed college courses and have earned a two-year associate’s degree. This will allow her to go straight into med school when she gets to college.

Tammy said Leah would also serve as delegate to the Congress of Future Medical leaders in Lowell, Massachusetts in June.

She said the school had been a challenge for her daughter, who had “become bored” with traditional school. She said while it is more work-intensive, the benefits are clear.

“This place is just able to push them out there for so many opportunities,” she said.

There has been much discussion nationally about how to lure girls into STEM education and fields that have been traditionally dominated by boys.

Shah said the current breakdown at the school is about a 50/50 split between the genders.

She said the technology and engineering programs have been of more interest to boys, while the medical program is comprised more of girls.

Shah said those studying are not interested in lower positions in their field.

“They’re wanting to be doctors and physicians,” she said.

Holman had nothing but good things to say when relating her experience at the school.

In her junior year, she said she had experienced “negative interactions with students and staff” at the middle and high schools in the county she attended prior to enrolling at the STEM+M school.

“Students were not treated equally,” she said, stating her concerns had been “ignored” when she had filed complaints.

Coming to the STEM+M school after a year studying abroad as an exchange student, she said the environment could not be more different.

“It’s wonderful,” she said. “It’s been a really positive experience. Bullying is shut down by the students. Everybody helps each other.”

She said, like Bailey, she will have a two-year associate’s degree when graduating. She plans to go into aerospace engineering where she will focus on “anything that goes out of the earth’s atmosphere.”

Holman credits the system put in place by the school, in which students are split into “elemental groups,” rather than grades, as playing a big part in the improved environment.

She also said the staff has been extremely receptive to student concerns.

“They go out of their way to help you,” she said. “The extra effort is made.

Shah said more informational meetings are planned for the remaining months of the year, set for 7 p.m. at the school on Feb. 12, March 8, April 12 and May 10.

In addition to the STEM+M school, students in Lawrence County have another option for STEM education. The unaffiliated Project Lead the Way program, coordinated by Collins Career Center, offers classes in most of the county’s high and middle schools.