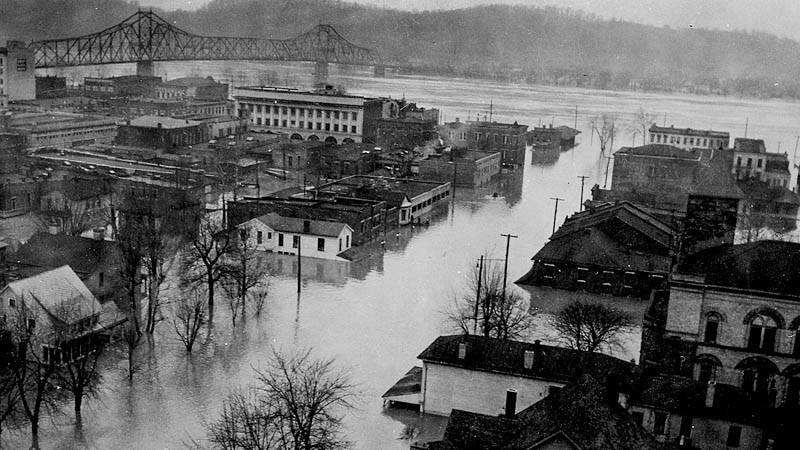 A panoramic view of Ironton showing high water during the flood of 1937.

CINCINNATI — Kathy Cannon-Wiechman said she always heard stories of the 1937 flood from her father’s days growing up in Ironton.

Albert Joseph Cannon moved from the city at age 21, before she was born. He was the son of Albert James Cannon, who served as assistant postmaster in the region.

Born and raised in Cincinnati, Cannon-Wiechman has been the author of three historical novels for the Highlights Foundation, the nonprofit education group associated with Highlights for Children magazine.

Her latest, “Not on Fifth Street,” released in 2017, focuses on the flood, which devastated communities along the course of the Ohio River, from Pittsburgh to the Mississippi River.

She said the book is loosely based on her father’s story and is set in his house in Ironton.

“I made my own characters,” she said. “It’s about two brothers who are at odds with each other over a girl. They end up on opposite sides of the river. They survive the flood and must come back together again.”

Cannon-Wiechman said she still has family in the Ironton area and visits frequently.
To research the book, she visited the Briggs Lawrence County Public Library and pulled their accounts of the flood.

“I looked at what they had,” she said. “I read the flood journal and the flood letter and looked at the photos.”

She said she also talked to her first cousin, who was 14 at the time of the flood.

“I took the personal and family stories and made sure what I had was accurate,” she said of her research at the library.

While she said the flood also affected her hometown of Cincinnati, she chose Ironton as the setting.

“I liked my father’s story, and I wanted a small town feel,” she said.

Cannon-Wiechman said she began writing after her children grew up. It runs in her family and her mother was a published poet.

After her children graduated, she got in touch with the Highlights group and took courses before beginning her writing.

Her previous works, “Like a River” and “Empty Places,” dealt with the Civil War and the Great Depression, respectively.

Her next work will be set during the Civil War.

“It’s not about the war itself, but it takes place in Wilmington, North Carolina,” she said.

She said the novels are designed to be age appropriate for an audience of ages 8 and up.

“But I’ve been surprised at the crossover into adult readers,” she said. “My characters are 13-15 in age, but my readers are eight to 86. For my Civil War novel, one of my readers was a man whose grandfather fought in the war. I’ve been surprised. My intention was making history come alive for young readers.”

She said she sought to make the story of the 1937, which impacted 13 states and claimed the lives of 385 people, as it is not well-known outside of the regions it impacted. She said it is important for people to know what happened.

“If you live along the Ohio, you’ve heard of it,” she said. “But elsewhere, no one knows about it.”

Cannon-Wiechman said her books are available in most bookstores. They can also be found on Amazon or through her website, www.kathycannonwiechman.com.