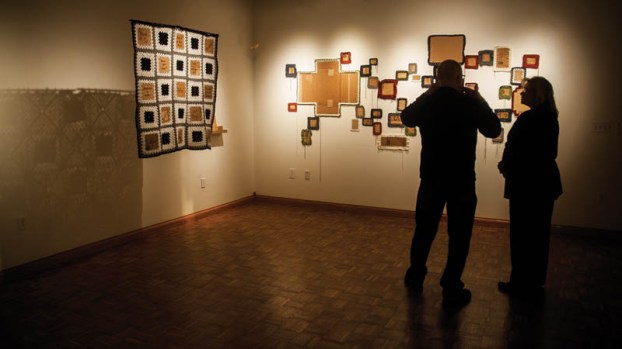 A ‘Down home’ show

As part of the program, she did 10-day-a-piece residencies twice a year, where some her fellow students came from as far away as Shanghai.

She said she “hit a wall” halfway through the program, and was taken aside by an instructor.

“I told him, ‘I’m from Appalachia. I don’t feel I can go toe-to-toe with these people,” she said. “He said, ‘We really need to investigate this and see what is fueling it.’”

She said she came up with four statements about her self-perception, including referring to herself as “a hillbilly.’”

She wrote these on pieces of cardboard, that were framed with her crochet work, forming what she calls “granny squares.”

“I was looking for material familiar to me as part of a transient existence,” she said of the cardboard.

“Growing up, we didn’t have a lot of money and we moved a lot,” she said, stating she often lived out of the cardboard boxes upon entering a new residence. “Cardboard, to me, has a personal feel, and it does to a lot of people.”

Knipp said, from there, her work kept getting bigger and bigger, forming the larger, quilt-like pieces in her show, now hanging in the gallery at OUS.

Among the other pieces in the mixed media show are a series that incorporates photos of her father, grandfather and great-grandfather, taken for promotion when they worked for AK Steel.

Accompanying them is quote from her brother, reading “They think we’re all just uneducated rednecks.”

Knipp said she interviewed family and friends from the area, asking them about their thoughts on attitudes toward Appalachia.

“I got so much,” she said. “That’s why everything in here is in quotes.”

She said the pieces took on a new meaning for her during the presidential campaign, when she heard talk of the “forgotten” people from Appalachia, including miners and steelworkers during coverage of Donald Trump’s stops in the area.

Her large quilt piece includes several regional words and sayings, such as “britches,” “holler,” “bless your heart” and “Heavens to Betsy,” which she said she solicited from people native to the area.

“It has a very down home feel,” she said of the show.

After finishing graduate school, Knipp returned to Ironton with her husband, where she serves as gallery coordinator at OUS and has been hired as an adjunct instructor.

“I love the program here,” she said.

Knipp’s show had an opening reception on Thursday and will run through Feb. 15. She said her work can also be seen on Instagram at KnippVictoria.

KDMC, OLBH taking precautions ASHLAND — Two local hospitals announced on Friday that because of the flu epidemic, they are... read more