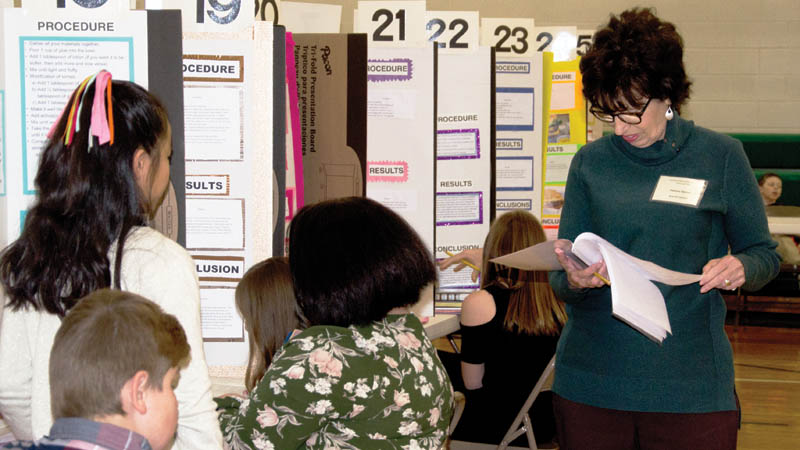 Students wait to have their projects judged during the fifth grade science fair at Fairland West Elementary on Friday.

ROME TOWNSHIP — Fifth graders at Fairland West Elementary showed off the results of their scientific work and research on Friday.

The school hosted its annual science fair in the gymnasium, with 130 students taking part.

Projects covered a range of topics, from DNA, to plants, to geology, and students used the scientific method to form a hypothesis, perform an experiment and evaluate the results.

“I wanted to see which sugary drink causes the most decay and cavities,” he said.

Jarrell set up five containers and put an eggshell in each. He then added a different drink – water, Mountain Dew, Gatorade, orange juice and chocolate milk to each one.

He said he then guessed Mountain Dew would do the most damage, which turned out to be true, after he observed the effects for five days.

“The least was water,” he said.

His project focused on the dangers of drug addiction, a subject his father has focused heavily on in his career.

He wanted to look into the knowledge his fellow students had on the issue.

“My dad and I made up true/false questions and handed them out to everyone in the fifth grade,” he said.

Ballard asked students questions such as whether drug addiction can start with legal drugs, whether pills given by a doctor are drugs and whether legal drugs were a danger.

He said, as he figured, students knew that drugs and heroin were harmful, with more than 90 percent answering correctly, though he said there was still some room to learn on other aspects.

He said one question that scored low was when he asked students whether you can become a drug addict on the first use of a drug, which many thought, incorrectly was so.

“But, like my dad said, it’s OK if they think that, because there’s less of a chance they use in the future,” Ballard said.

William Callicoat was looking into the effect of mold on food, specifically fast food from Wendy’s and McDonald’s.

He took a burger from each and observed how long it took mold to form on each.
Callicoat said he hypothesized the Wendy’s burger would mold fastest, as it had less preservatives and had not been frozen.

As he predicted, the Wendy’s burger molded fastest.

“I hope people eat Wendy’s, instead of McDonald’s,” he said. “So they don’t get sick from the preservatives.”

Maddy Rummel wanted to test the effect of colored lights on plants.

“I tested yellow, blue and white light on moonflowers to see which made them grow the fastest,” she said.

Rummel said she expected the yellow light to work best, as it “was the same color as the sun,” but found that the blue had the most effect.

She said, in her research and reading on the topic, she found that a combination of blue and yellow has the best overall effect.

Taking first place in the fair was Gabriel Polcyn, who tested the effects of air pressure on soccer balls, while second went to Gracie Rogers, who created “rocksicles,” homemade versions of stalactites.

The county science fair, which is open to fifth through eighth graders took place on Thursday, but Fairland hosts its own science fair for its students, Joseph said.

But she said students who win at the fair are still eligible to apply and take part in the district science fair, which takes place at Rio Grande University.

An Ohio University graduate, she said this is  her first year in teaching.

“We started in December from ground zero,” she said of the work and research students had put into the projects, which she was impressed by.

“They worked very hard on these projects, which they turned out really nice,” she said of the first-time science fair experience.