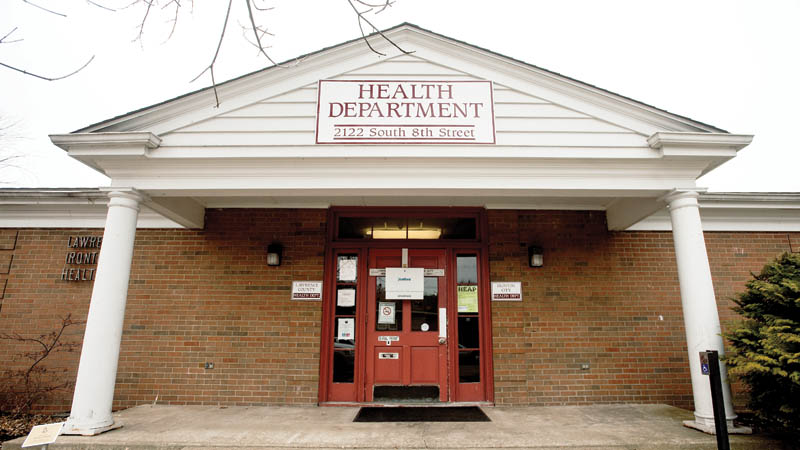 The Ironton and Lawrence County Health Department building is located at 2122 S. Eighth Street in Ironton.

The accreditation fee is $14,000, which can be paid over two years, and there is an annual fee of $5,600. And Keith said if the city is unable to make an application for accreditation by June 30, “we lose our ability to provide health services.”

Keith said that, under the Ohio Revised Code, any decision about merging the two health departments would have to be voted by the city council and the county’s advisory council, before she could go ahead with her recommendations.

If a health district is created, there would be a .28 millage that would come from city funds, which Keith said would be between $40,000-$43,000. The Ironton Health Department gets $55,000 from city funds. She added the registar’s position would be part of the negotiations and all other staff could apply for jobs with the new health district.

Council Vice Mayor Rich Blankenship said that they were not voting on the idea on Thursday and there were a lot of things to consider before a decision is made.

He asked if the city would have a position on the health district board. Keith said she would on the advisory committee.

Frank Murphy, a former Ironton City Councilman, said he and the American Legion had worked with the health department for years with their concession trailer and the business they have across the street from the City Center. He said now the health department follows state law and it is “a lot harder than the old buddy system. But, it is a lot safer for our citizens.”

Murphy said the county is already overworked with all they have to do and the citizens of Ironton would lose a lot. He pointed out that the city health department gave children under 18 years of age flu shots for $5, while other places charged $40 if they didn’t have insurance.

“We are going to have kids without flu shots, without vaccines, their physicals for school,” he said. “You are going to cost the citizens hundreds of dollars. It is cheaper to take your kids to our health department than it is to a doctor and pay the co-pay.”

Scott Evans, an attorney and a member of the Ironton Health Board, asked the council to carefully consider the merger proposal. He said that there may be some marginal cost savings but he didn’t believe that there could be hidden costs in a merger.

“I think there needs to be a consideration of all the costs and all the benefits of maintaining a separate city health board,” Evans said. He added that there are a number of services that the city offers that the county doesn’t, including mosquito control, weeds and seeds programs, and tagging of cars in yards. The city also does hepatitis C testing and screening, sports physicals, free blood pressure checks, preschool vision testing, flu and pneumonia clinics and more.

Evans said that there is a plan that would allow the health department board to attain certification and it was doable.

“There is a serious analysis that I would encourage you to undertake before deciding what the costs are before letting go of the city health department,” he said.

Laura Brown, the director of the Ironton Health Department, said they have made progress towards accreditation and said she could give an update at the next meeting.