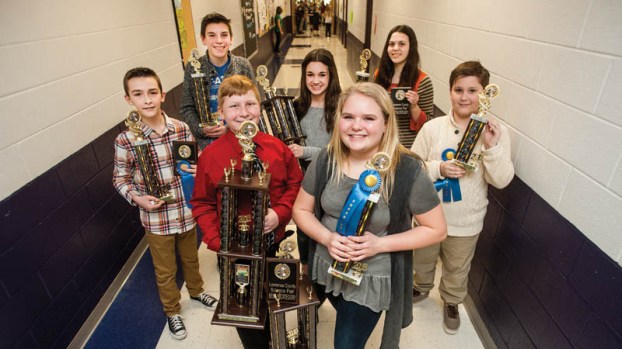 In the overall awards, the school took all three trophies, while, in the individual grade categories, Chesapeake won the majority of top honors.

“We’ve never swept before,” principal Ty Johnson said. “We can take pride in this and it’s a testament to these kids’ hard work.”

Best overall for the fair went to Zoey Schmidt, with Dawson Forbush coming in second place and Allison Plantz in third.

In the seventh/eighth grade completion, Forbush took the top honor, with his fellow students Plantz, Shields and Andrew Davis coming in second, third and fifth, respectively.

Schmidt, who earned a perfect score in her first year of competition, said she intends to go on to compete in the regional science fair at Rio Grande University.

Her project, “Bath Beads: Fizz or Flop,” studied the composition of beads and how it affected fizziness.

“I was seeing if I added more baking soda, more citric acid and less corn starch, if there would be more fizz,” she said, noting she compared results to the opposite mix, with less citric acid, less baking soda and more corn starch.

Forbush entered “Voltaic Variable” into the competition, his second year taking part in the fair.

“I was seeing if temperature affected voltage and ampage output of solar panels,” he said.

He said, in his experiments, he found that colder temperatures were more conducive.

Plantz, who competed in the state science fair last year, entered “I See, You See” into the county competition this year.

“I was studying if glasses have anything to do with the way people see optical illusions,” she said.

She said she showed illustrations, containing optical illusions, to people with and without glasses and found that those who wear glasses were less likely to see them.

“It had the effect I thought it would, but not as big as I figured,” she said.
Julie Byers, the eighth grade science teacher for the school, serves as science fair coordinator.

She said she was “extremely proud” of the students.

She said seven students received a superior rating at the fair and that five of these were best in their category.

“It’s the highest superior rating they can get in their category,” she said.

Byers is enjoying a second year of seeing her students excel at the fair. Last year saw four students from Chesapeake make it to the state level, and the school won first and second overall at the county level.

Breakfast for a cause

On Saturday, the Ironton Rotary Club had its annual pancake breakfast at the Knights of Columbus hall. The proceeds from... read more