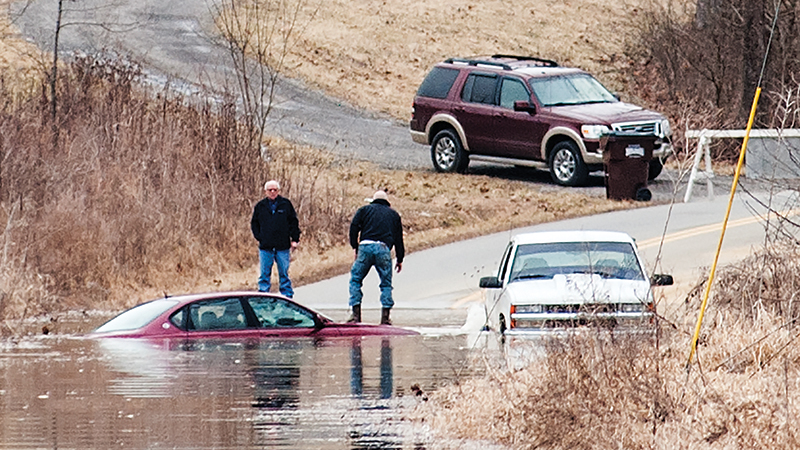 Ohio State Highway Patrol Trooper Darrin Webb said Louise Kelley, 70, of Pedro, was going south on County Road 181 around 8:30 a.m. and encountered sawhorse barricades and a sign saying the road was closed due to high water.

A woman had to be rescued on Tuesday morning after she drove her car into floodwater on County Road 181.

Ohio State Highway Patrol Trooper Darrin Webb said Louise Kelley, 70, of Pedro, was going south on County Road 181 around 8:30 a.m. and encountered sawhorse barricades and a sign saying the road was closed due to high water.

She drove around the barricade and her 2003 Chevrolet car was caught up in the water.

“I don’t know what she was thinking,” Webb said. “She told me she just made a mistake. She said she was going to go behind it and turn around. But when she hit the water, her car floated approximately 50 yards to where the floodwater was about three foot deep.”

A man in a truck saw her predicament and drove his “jacked up” truck into the water and rescued her before first responders made it to the scene.

“It was deep, the water was up to her waist,” Webb said. “So, she was very fortunate this morning.”

Kelley was taken to Our Lady Of Bellefonte Hospital in Bellefonte, Kentucky.

“She wasn’t injured, but the water was frigid. And due to her age and the temperature of the water, they were concerned about the possibility of hypothermia. Once her core temperature is up, they will release her.”

Webb, who worked for a sheriff’s department as part of the watercraft swift water rescue unit before joining the OSHP, said people should never drive into water when it crosses the road.

“It is very dangerous,” he said. “You never know if the road has washed away. You can’t tell how bad it is. And people don’t understand about the force of the water. It will pick you up and move you. Three inches of water will move a fully loaded tractor-trailer, people don’t believe it until they see it.”

He said that people with “jacked up” trucks are driving through the high water and could face getting a ticket if they are caught.

“We catch them, we will write them a ticket. The road is closed and barricaded, so we will ticket them for driving on a closed road,” Webb said.