Skills to be a man 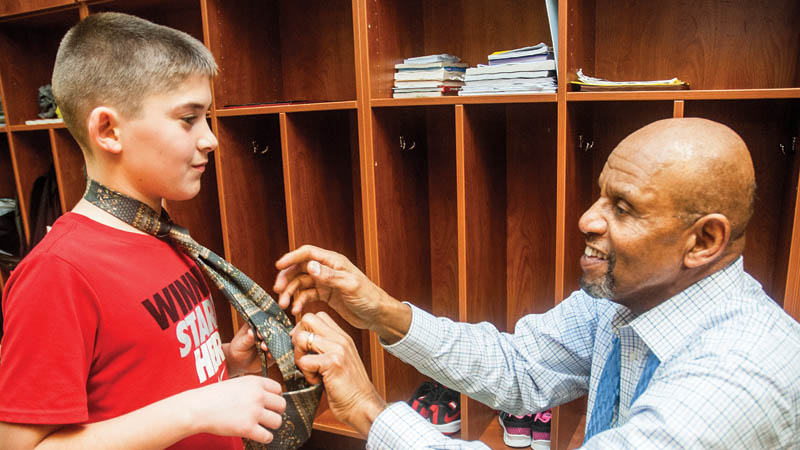 Hugh Scott, right, helps Carson Freeman with how to tie a tie during the Gentlemen’s Academy meeting at Ironton Elementary School on Thursday.

For the second year, Ironton Elementary School has an after-school program to teach some of their students the skills to be a gentleman.

On Thursday, members of the community came to the school for a “mentor and mingle” session with the members of the Gentlemen’s Academy. The men were there to show the fourth and fifth graders how to tie a tie and the boys had a chance to use the conversational skills they had been taught.

IES Assistant Principal David Ashworth came up with the program last year and brought it back again because of the popularity of the Academy.

“We started this because we saw a basic need with young boys making their transition into manhood. Some of the basics, they just weren’t grasping,” he said. “Their manners, being courteous to others, thinking of others before themselves, basic elements we would define as being a gentleman, were missing and no one was teaching them.”

Among the skills they are being taught are writing a proper thank you note, changing the oil on a car and checking tire pressure, flag etiquette, how to cook, how to sew, how to iron a shirt, and how to have a polite conversation. They will also learn how to use tools to fix simple broken items

Their last class will have them going to The Depot restaurant with retired women to use their newfound skills in a social setting.

“Boys today can beat a video game, but they can’t fix a simple plumbing problem,” Ashworth said. “So, we are trying to teach them the basic things they will need in life.”

He added that the class size doubled over last year’s and that they are excited for the days they have the academy.

“The kids are excited and I talk to their parents and they are already seeing a change in their home,” Ashworth said. “The goal is that we see the change in our community.”

Fourth grader Bradeen Barber is in his first year at the Gentlemen’s Academy.

“I was trying to do some after-school stuff and I thought this would be pretty good for me,” he said. “I’ve learned how to tie a tie, which is pretty hard, but I think I’ve got it.”

He said there hasn’t been anything he didn’t like about the class.

“It’s all been pretty cool,” Barber said. “I would recommend it to my friends. It is pretty fun and it is a lot of things you need for when you are older.”

Josiah Stewart, a fifth-grader, is in his second year of the academy.

“I just wanted to understand it more,” he said. “It’s been useful.”

His favorite part was a map exploration where they had to locate items in the schoolyard by using a map.

“I joined it twice just to learn how to be a gentleman again,” the fifth grader said. “It’s just been a lot of fun. I really enjoyed the cooking part, I can cook bacon, eggs and biscuits.”

Ashworth said because of the popularity and success of the program, there would be a Ladies Academy next semester.