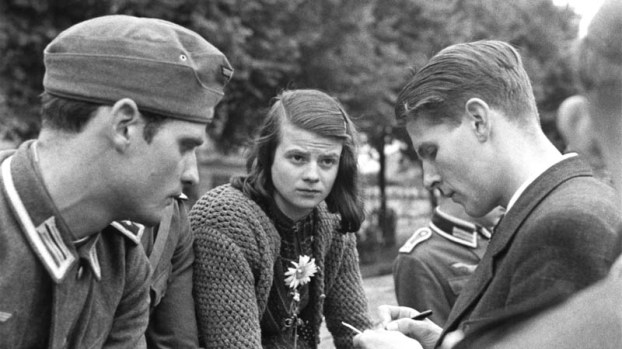 The members of the White Rose, from left, Hans Scholl, Sophie Scholl and Cristoph Probst, who worked to resist the regime of Nazi Germany, are seen in this 1942 photo. The trio were executed on Feb. 22, 1943 for their year-long campaign of dissent.

75 years later, a legacy of bravery

It has been said that in an age of deceit, telling the truth is a revolutionary act.

On Thursday, the world will remember the 75th anniversary of the sacrifice of a group of heroes, who gave their lives bringing the truth to the masses, in a time of unprecedented horror.

The White Rose was student movement at the University of Munich in World War II who organized opposition to Adolph Hitler’s rule of Germany.

The group focused their activities on countering the Nazi propaganda machine, filling the roles of both activists and journalists against the state’s oppression.

Their effort centered on a series of leaflets, distributed in Munich and, later, the surrounding country, calling out the Nazis for their oppression and atrocities

At the core of the White Rose leadership were the Scholl siblings, Hans, 24, and Sophie, 21, and their classmates, Christoph Probst, 24.

The group denounced the war, which they told the public was lost, citing the high casualties of soldiers and predicted, rightly, that Hitler’s invasion of Russia would ultimately destroy the country.

They lamented the loss of human rights under Nazi rule and, through information they had learned from soldiers on the eastern front, were among the first to expose the crimes carried out against the Jewish population in Russia and Poland.

“Since the conquest of Poland, 300,000 Jews have been murdered in this country in the most bestial way,” the group wrote in its second leaflet. “The German people slumber on in dull, stupid sleep and encourage the fascist criminals.”

Knowing the risks they were taking in a brutal police state, the group persevered,  “We will not be silent,” they wrote in the fourth leaflet. “We are your bad conscience. The White Rose will not leave you in peace!”

Ultimately, the dangers caught up with them. While distributing leaflets in the halls of the university, the Scholls were spotted and reported to the Gestapo, who quickly arrested them.

Unable to deny the evidence the secret police had collected on them, Hans confessed to leaving the leaflets.  As a young woman, Sophie was offered the chance to declare her innocence and go free, but she chose to stand by her brother and the cause and confessed as well.

When the siblings, along with Probst, identified as author of the leaflets, were brought before the so-called “People’s Court” on charges of treason, their fate was sealed.

Personally established by Hitler, the show trials allowed no evidence on behalf of defendants and were over in less than an hour. The proceedings were conducted by infamous Nazi judge, Roland Freisler, who served as prosecutor, judge, jury and gleefully sentenced most of those who came before him to death.

Freisler was known for theatrically screaming at and berating defendants, causing many to break down from his intimidation in the trials.

This was not the case with the Scholls and Probst, who were noted for their strength and stoicism before him.

“You know as well as we do that the war is lost,’ Sophie told Freisler during the trial.

“Why are you so cowardly that you won’t admit it?”

The three remained defiant, even as Freisler sentenced them to beheading in the guillotine, to be carried out that evening.

“It is such a splendid sunny day, and I have to go,” Scholl said in her last words, as she approached the execution chamber. “But what does my death matter, if through us, thousands of people are awakened and stirred to action?”

After Sophie’s execution, Hans was taken to the chamber, where he cried out “Long live freedom” before his death.

While the members of the White Rose may have been executed on Feb. 22, 1943, their message was not silenced. Their final leaflet, smuggled out of Germany, was reproduced and dropped by Allied planes over the nation as Hitler’s reign fell. In the following decades, they have achieved legendary status among the German public and have been honored throughout the nation they tried to save from fascism.

Their story has been commemorated in a number of books and media, including, most recently, the acclaimed film, “Sophie Scholl: The Final Days,” released in 2014
Lillian Garrett-Groag, an American playwright, summed up the actions of the trio, as well as their fellow members, who were eventually executed as well.

“It is possibly the most spectacular moment of resistance that I can think of in the twentieth century,” she said. “The fact that five little kids, in the mouth of the wolf, where it really counted, had the tremendous courage to do what they did, is spectacular to me. I know that the world is better for them having been there, but I do not know why.”

The Vex Robotics team from Rock Hill High School has earned a trip to the state championship. The team, part... read more