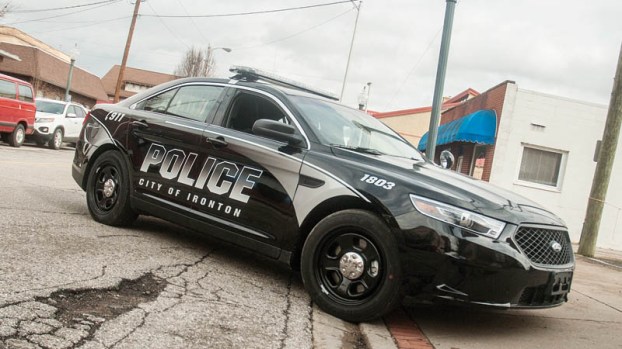 People driving through Ironton may not immediately recognize the city’s police cars.

After years of running their Crown Victoria cruisers all over town, the Ironton Police Department has five new vehicles on the road.

The total includes an SUV for the K-9 unit, three road patrol Ford Tarsus Interceptors and an unmarked vehicle for the detective division.

The road patrol cars came in a couple weeks ago, but it took some time to get them equipped and decaled to mark them as police cars.

“The one has just been on the road for five days now,” Wagner said.

She added the vehicles were bought through a state program and didn’t cost the city taxpayers a dime.

“There was no fee increases, no tax increases. These vehicles came out of money from our city impound lots, from drug forfeitures, abandoned vehicles, stuff like that,” she said. “No money came out of the city’s general fund, so it was no cost to the taxpayers of Ironton.”

Wagner figures the new vehicles will probably save the department money in the long run.

“We’ve got to replenish our fleet and we will probably save enough from fuel and maintenance costs to offset the cost of these vehicles over time,” she said, adding that some of the vehicles are on the road 24 hours a day, seven days a week. “They are assigned to individual officers but when vehicles are down for maintenance or wrecked, they have to share them.”

Wagner said the officers were happy to have new vehicles.

“They are excited that they come out and the cars actually start without having to jump something or to have to send it to the garage and share a car with another officer” she said.

“At one point, we did have several vehicles, but our K-9 unit car got hit as it was parked driverless. So we used another vehicle to replace that one, because you can’t just put a K-9 in the back seat of a car, and then a week later, that vehicle got hit,” Wagner said. Another cruiser was so old that the transmission and the engine went. “So we were down three vehicles before we ever got these. I think we are just taking two out of the fleet.”

Wagner thanked the citizens for their support and the Ironton City Council for passing a measure that allowed the IPD to buy the cars.

“We have had nothing but support from the community, from the mayor’s office, from our city council,” she said.

Skills to be a man