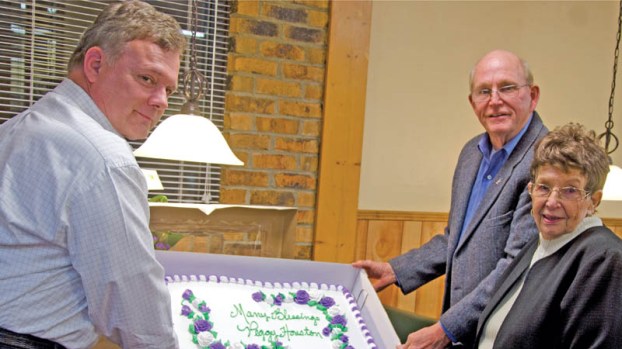 Chesapeake thanks clerk-treasurer with retirement celebration

A retirement party took place at Ponderosa for Peggy Houston, who left the elected position in January after 24 years of service to the village.

Former council member Paul Hart, who retired a month prior to Houston, read a statement on behalf of the village.

“When Peggy Houston took over as clerk-treasurer, this used to be Mayberry, USA,” he said. “Today, that’s not the case. The rules and regulations the government has felt the need for have changed the job. I have to say I was really glad Peggy was on guard in doing that job.”

“It makes the job tough,” he said. “But Peggy made it happen. Tonight is Peggy Houston’s night.”

He said Houston was informed and had a deep knowledge of the village’s workings.

“If you have questions, point them to Peggy, because she can give you an answer,” Hart said.

Former Mayor Dick Gilpin followed Hart, and presented Houston with a certificate of appreciation, on behalf of the Lawrence County Economic Development Cooperation.

“When I became mayor, I didn’t understand all of what Peggy did,” he said. “She taught me a lot and she’s the reason I had so much success as mayor.”

Lawrence County Auditor Jason Stephens, whose office worked extensively with Houston, was on hand to honor her.

“We want to thank you very much for all of your service,” he said. “We are really going to miss working with Peggy Houston.”

Tommy Templeton, who is the village’s current mayor, presented Houston with a plaque. He thanked those who came to celebrate her retirement, though he said he was using that word loosely, as Houston has said she will gladly remain on call for any help needed.

“We want to thank you from the bottom of our heart for 24 years of service to the village of Chesapeake,” he said. “We cant fathom where our little village would be without her expertise. Peggy, we love you and always will.”

Houston’s position is being filled by Christine Nichols, who she personally trained. The office is slated to be on the ballot again in 2019.

Houston was clearly moved by the night.

“I love Chesapeake and the people of Chesapeake. You don’t know what this means to me,” she said, thanking everyone. “I also want to thank God, whose led me through many problems. I still pray and will continue to pray for you. Thank you so much.”

Heavy rain has caused severe flooding along the Ohio River, and numerous areas throughout Lawrence County have seen the rapid... read more