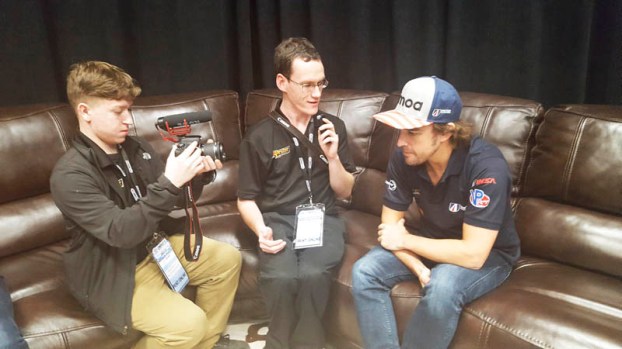 OUS student on track to pursue his dream

Ohio University Southern Electronic Media student, Chris Murdock, has been watching NASCAR for as long as he can remember. His background knowledge of the sport came in handy when his friend and managing editor of “Race Chaser Online,” Jacob Seelman, a broadcast journalism student at Winthrop University in Rock Hill, South Carolina, needed a writer for his website.

Murdock put his classroom skills to work in the real world when he began blogging and contributing videos to the site.

At the end of January, Murdock was invited to cover the NASCAR Media Tour in Charlotte, North Carolina, where he learned more about the business behind the sport and had an opportunity to see drivers from a perspective other than behind the wheel.

The event is a kickoff to race season and an opportunity for the media to reach out to the drivers and share what they learn with fans. Murdock will be back in North Carolina in May, this time at the Charlotte Motor Speedway for the Coca-Cola 600.

Murdock began attending NASCAR races as a young kid. He fondly remembers those races at both Bristol and Charlotte Motor Speedway as a cherished part of his childhood and credits his love of the sport to these early experiences. To Murdock, NASCAR is about the excitement and energy. “It’s the fast-paced excitement of being at the track on race day that’s a truly unique experience,” he said. “My classes in Electronic Media have given me many great opportunities. My experience with ‘Race Chaser Online’ has given me a chance to use what I’ve learned over the past year-and-a-half  — I even surprise myself sometimes with what I can do.”

After graduation, Murdock plans to move to Mooresville, North Carolina. He would also like to be more involved with “Race Chaser Online.” “I’ve been given a great opportunity to continue with my video work and work in a sport that I’ve been a fan of since I can remember,” Murdock said.