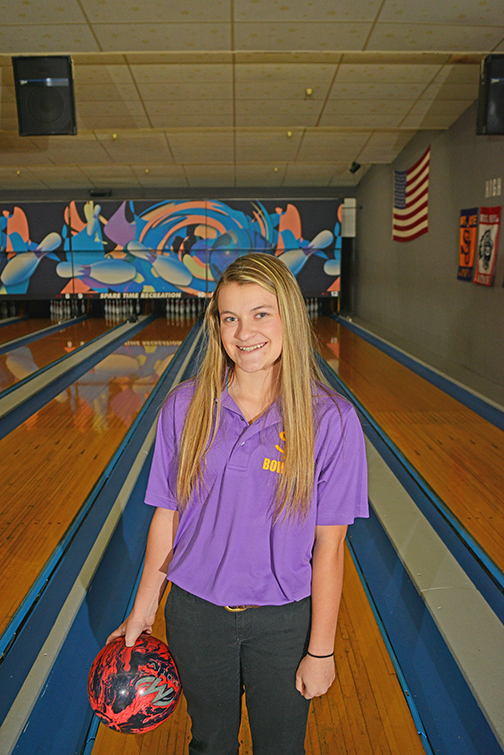 A couple of years ago, Kelsey Malone didn’t have much to do during the winter months.
But suddenly her schedule might require a travel secretary.
Malone spends her falls playing volleyball and her spring and summers playing softball. With the urging of some friends last year, she took up bowling.
“A couple of my friends were doing it and they wanted me to bowl with them and I thought it would be pretty fun since I didn’t do anything in the winter,” said Malone.
Less than two years later, the St. Joseph Female Flyers’ junior finds herself not only busying herself with bowling practice and games, she’s taking it on the road to another level.
Last weekend at the sectional tournament, Malone became the first St. Joseph bowling team member to qualify for the district tournament.
Malone was the top individual to qualify for the district. She bowled games of 154, 182 and 169 for a 505 series at the sectional tournament held in Chillicothe.
“This is her second full year of bowling. She’s improved every week,” said St. Joseph coach Chad Cartmell. “She has a really good chance if she puts up the numbers she did last week.
“She has the determination. She said her number one goal before the season was to make the district. She got her goal and now we have to get her to the state.”
Malone said she has come a long way from when she first started last year.
“At my first practice last year, I bowl an 80. Now I bowl 120’s and above,” she said.
The Ohio High School Athletic Association adopted bowling as a sanctioned sport in 2007. Initially local teams bowled as a club sport but St. Joseph made it a sanctioned sport three years ago.
The district tournament will be held at 11 a.m. at Shawnee Lanes in Chillicothe. Malone admits she is getting nervous again.
“I was really nervous (at the sectional). Once I started bowling, I wasn’t really nervous and I just had fun with it,” Malone said. “I’m really nervous (about the district). I’m going to have to step it up a lot more and do better than I did, but I think I can do it if I work at it.”
Work ethic is no problem for Malone. She not only bowls at team practices every week but returns to the Spare Time bowling lanes once or twice a week on her own.
Malone’s favorite sport is remains softball although she admits that bowling has climbed up to second on her list of activities.
In fact, she has started to think about trying to bowl in college.
“I want to stick with it. I’ve been looking at colleges to bowl. Shawnee State and Morehead State both have bowling,” said Malone.