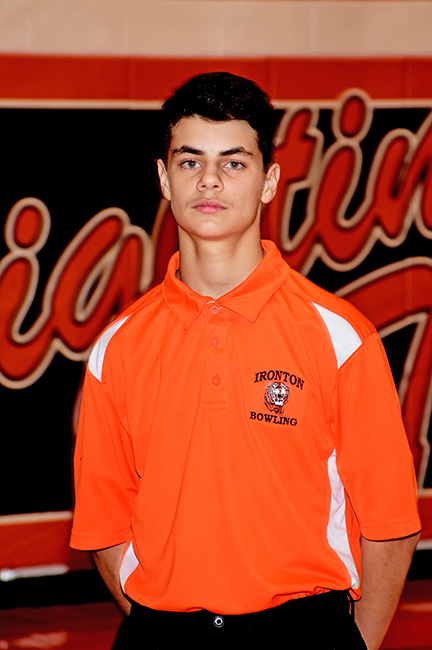 Brayden Easterling got a taste of success last year and he decided to take a bigger bite this season.
Easterling just missed qualifying for the district bowling tournament last year and became motived to reach that goal this year.
The Ironton sophomore did just that last Saturday at the sectional tournament as he became the first Fighting Tigers’ bowling team member to qualify for the district tournament.
“I was hoping I’d qualify. I was 30 points from making it last year by myself. I felt like I got better over the years. I was hoping to make it this year and I guess I did,” said Easterling.
In three games, Easterling bowled games of 256, 214 and 231 for a 701 series, well above the 600-series average.
Easterling’s performance was the top scored among the top four individual qualifiers who were not on the winning team that also advanced.
Out of 104 boys who bowled in the sectional tournament at Shawnee Lanes in Chillcothe, Easterling was second overall.
“There was only one other kid who beat his score, but he was on the team that qualified,” said Ironton coach Steve Cartmell.
“He’s been pretty consistent all year. He bowled well but he’s capable of doing that again and more.”
The Ohio High School Athletic Association adopted bowling as a sanctioned sport in 2007. Initially local teams bowled as a club sport but Ironton made it a sanctioned sport four years ago.
Easterling began bowling just four years ago. In his brief career, he is already bowling at a 205 average.
“I just got bored at the house so I just came over here (to Spare Time) and bowled,” said Easterling.
It isn’t the first time Easterling has just decided to take up a sport and experience rather quick success. He began golfing about four years ago and — despite missing last year with a broken hand — he qualified for the district tournament this past fall.
“I bowl almost every single day. I golf every time I get a chance to try it,” said Easterling.
Although he is confident heading into the district, Easterling admits “I’m pretty nervous.”
“I want to make the state before I graduate. It would be nice to win it,” said Easterling.
If Easterling can continue success at the high school level, he’ll have an excellent chance to achieve another goal.
“I want to bowl college,” said Easterling. “I know the Shawnee State coach (Bryan Sturgell) well. He bowled in a tournament last Sunday and I was there watching and I was talking to him.
“I played him in a tournament here. He beat me by 14 pins. We both shot over 215.”
The district tournament will begin at 11 a.m. on Saturday at Shawnee Lanes in Chillicothe.

Ironton heads back to Canton for state title game