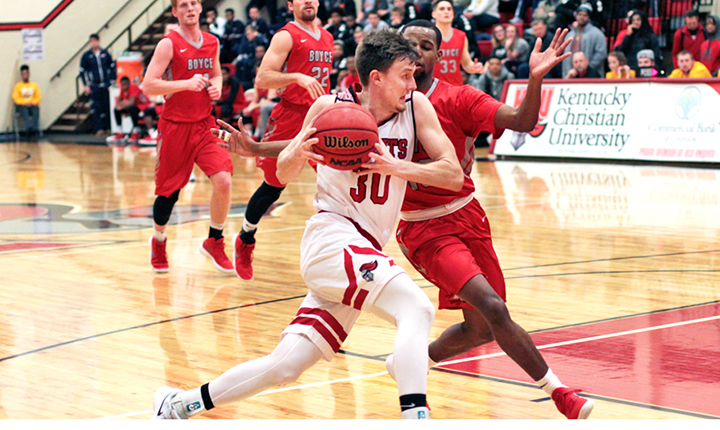 GRAYSON, Ky. — Brandon Barnes knew how to score in high school. He has continued to display what he knows at the college level, too.
The former South Point Pointers All-Ohio guard who set the career scoring record with 1,545 points and connected on 230 3-pointers.
Barnes continued his scoring at two difference schools and recorded the 1,000th point of his college career on Thursday, Feb. 22. He entered the game needing seven points and scored 26.
“Honestly, 1,000 in college meant more to me (than high school) because there were a lot of times I didn’t think that would ever happen. There are more people who can play. You’re at constant competition for playing time with your own teammates. A lot of people don’t get the opportunity,” said Barnes.
Barnes was named first team All-Mideast Region averaging 19.5 points per game.
His career high was 40 points against Alice Lloyd in January and came on the same day he attended the funeral of his grandmother Midge Payne.
Grandmother Midge was a constant fan at Brandon’s games and he dedicated the scoring performance to her.
“I went to the funeral and I was exhausted. It was such a long day and it took a lot out of me. I went to the game and knew Alice Lloyd is really good and trying not to fall asleep. I was praying to God to have some kind of energy and not embarrass myself,” said Barnes  who also served as a pallbearer.
“That was something else. A lot of people don’t know about it. I told my mom the last time mamaw Payne goes to see me play I got 38. After the game, she said in typical mamaw fashion, she said ‘you played great. But you mean you couldn’t get two more.’
“I went up there, the game started and the first two possession of the game it was kick-out and a three. No clue where the energy came from. I think mamaw had something to do with that. After the game I said, ‘Well mamaw, I got you your two points.’”
Last season, Barnes racked up 38- and 35-point games.
Kentucky Christian received an at-large bid to the National Christian College Athletic Association tournament in Greenville, N.C. next week.
Barnes will enter the tournament with 1,038 career points.
Barnes was a two-year varsity started at Ave Maria University, a member of the Sun Conference (NAIA) in Ave Maria, Fla.
“It was a good fit. (KCU) need a guard who could score,” said Barnes. “I wanted to prove I could do it without my dad as coach. I had four different coaches in four years. Every year I had a new system and a new offense. It’s been a really good year.”
Brandon’s older brothers Bryce and Blake both played college basketball.
Brandon’s uncles Eric and Ty Barnes played at KCU and Ty Barnes led the program to an NCCAA national title and was named the Player of the Year. He later played a year of professional basketball in Australia.
Brandon is the son of Chris and Peggy Barnes of Ironton. Chris was an All-Ohio player at Ironton and played college basketball.

GOODYEAR, Ariz. — The Cincinnati Reds have agreed to a minor league contract with veteran outfielder Ben Revere and have... read more