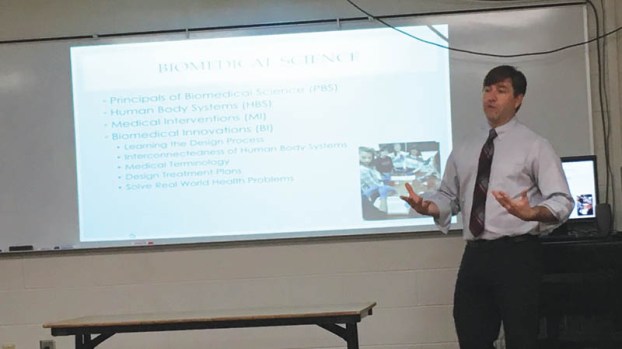 Planning for an academic future

COAL GROVE — With the school year more than half over, schools are beginning to plan for the fall and the Project Lead The Way program through Collins Career Technical Center is reaching out to students and parents.

An informational session took place on Thursday at Dawson-Bryant High School, giving prospective students and their families an overview of the science, technology, engineering and math (STEM) options available through the program.
PLTW offers biomedical and engineering courses of study in most of Lawrence County’s school districts, giving students a hands-on educational experience at their home campuses.

Matt Monteville, satellite director for CCTC, told those assembled at the school that the program presents tasks to give students an idea of possible careers.

He said the idea is to give them a sampling of options in their field, so that they can find a good fit for their skills and interests.

“Knowing what you want to do and not do is important,” he said.

Gary Salyer, the transition coordinator for PLTW, said the program at Collins was only the second in Ohio when it started.

“We began very early on and have been in the county for 14 years,” he said. “We’ve been doing this for a long time.”

Salyer said, contrary to what many people believe, there is not a shortage of jobs, but that companies are looking for qualified and trained individuals.

“They have to be highly educated and dependable,” he said, noting a survey of companies in the top 100 of Fortune magazine who were asked about hiring. “If you have those two things, there are 160,000 jobs out there, waiting on you.”

He said PLTW graduates have been highly successful in their fields, sharing the story of one who now makes a six-figure salary at the age of 25.

Salyer said the aim of the program is to teach problem solving skills and innovation through teamwork.

“It takes people years to learn to think critically,” he said, stating the program has focused on developing those abilities in the middle and high school years that students are enrolled. “It’s different then telling them to ‘Go home and memorize these 10 things for a test.’”

PLTW courses begin in seventh and eighth grades and when students reach the 11th grade, they can choose a specialization.

In addition to the informational meeting, PLTW’s instructors and current students met with prospective Dawson-Bryant students during the school day, giving them a sampling of the program.

Monteville said meetings are planned at other school districts in the following weeks, including March 13 at Chesapeake and March 15 at Rock Hill. Both are set for 6 p.m.