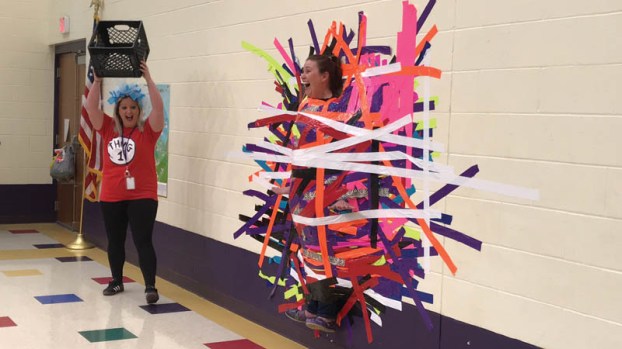 Chesapeake Elementary principal Trisha Harris, duct taped to the wall by students, remains suspended after the crate she was standing on is pulled out on Friday as part of the Read Across America Week celebration at the school.

Students duct tape principal to the wall in assembly

CHESAPEAKE — Schools across the nation celebrated Read Across America last week, in honor of the birthday of Dr. Seuss.

At Chesapeake Elementary, students dressed up in costumes and took part in activities each day, culminating in a celebration on Friday in the school’s gym.

Principal Trisha Harris had asked students to take home a sheet, pledging to read for 15 minutes each night, and return it.

Those who completed the challenge were brought to the stage on Friday, where they were each given the chance to add a strip of tape, duct taping Harris to the wall.

“Yes,” she replied, pinned to the wall, when asked if she was claustrophobic.

By the time all of the school’s kindergarten through fifth grades had came through and taken part in the task, Harris was secured strongly enough to the wall, that she remained suspended when the crate she was standing on was pulled out.

The stunts aimed at Harris have become a tradition for the school’s festivities. Last year, each student who signed a pledge got to dump a cup of slime over her. And the year before that, she was the target of pies thrown by the children.