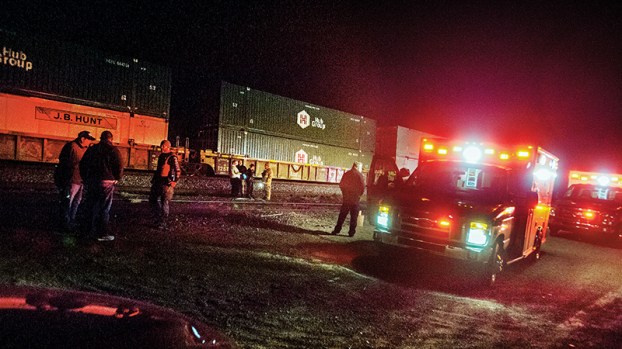 The Ironton Police Department are investigating the death of Terri Hall of Ironton who was struck by a train on Tuesday night.

The Ironton Police Department has identified the woman hit by a train on Tuesday night.

According to Detective Joe Ross, Terri Hall, 44, of Ironton, was walking down the middle of the tracks and was hit by a northbound Norfolk Southern train in the vicinity of Second Street and Mastin Avenue, around 10:20 p.m.

Ross said they do not know at this time why Hall was on the tracks.

“All we know is that she was walking in the middle of the tracks,” he said.

Ross said that they don’t know if she was wearing headphones or something that would make it so she couldn’t hear the train coming.

“As I understand, everyone says you cannot hear the train coming,” he said. “The horns are off to the side of the engine and the sound goes out.”

He said this is not the first time someone has been hit by a train in Ironton.

“It’s just a mystery to me why they couldn’t hear the train coming,” Ross said. “But we have had several of these happen in the city.”

He said it is illegal to walk on the tracks, as it is considered criminal trespass by the train company.

“So, do not walk on the tracks. It is not safe and it is illegal,” Ross said.

The Ironton Police Department, Ironton Fire Department, Lawrence County EMS and personnel from Norfolk Southern all responded to the scene of the accident.