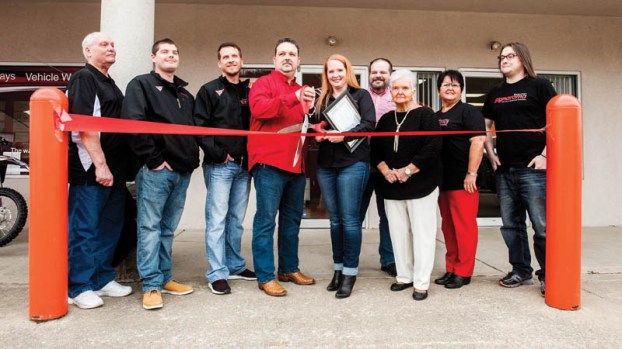 South Point business is first franchise in region for company

SOUTH POINT — A new custom sign-making and printing shop hosted its grand opening celebration and an open house on Monday.

Local officials, members of the Lawrence County Chamber of Commerce and others came out for the ribbon cutting of Signarama, located at 50 Township Road 1012, Suite A, near Walmart.

The business is owned by South Point residents Heather and Bernard Kincaid, who said they opened to their first customers three months ago.

The location is a franchise of the company, founded in 1986 and operating in 62 countries, Bernard said.

“It’s the largest sign company in the world,” he said.

He said he and Heather got the idea to start the shop last March, and Signarama flew the two of them to West Palm Beach to talk to them.

“They’ve been great,” Heather said. “They’ve helped us so much.”

He said the company’s vice president, A.J. Titus, was expected to drop by later in the day.

The franchise will be the company’s first move into the region, with its nearest locations in Lexington, Kentucky and Cincinnati.

Bernard said the location, which has five workers, offers a variety of services.

He said the location has its own designer on staff.

“We start from the beginning and take them all the way through to the sign,” he said.

Signarama is open from 8:30 a.m.-5 p.m., Monday through Friday and by appointment only on Saturdays.

Eastern Kentucky native’s show set for June 23 ASHLAND — A regional musician who has been making a name for... read more