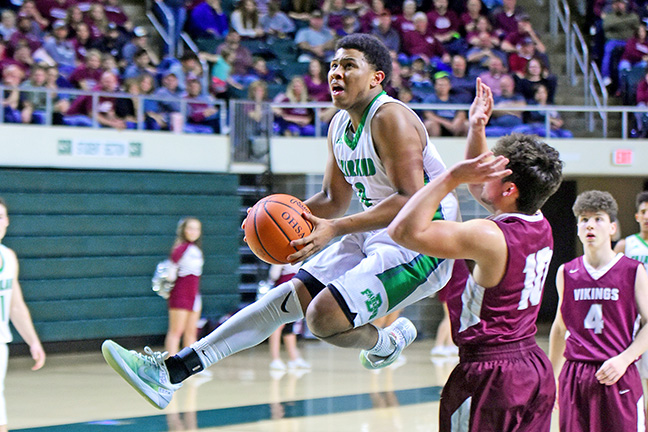 ATHENS — Mirror, mirror on the wall, which team is which?
Both the Fairland Dragons and Fairfield Union Falcons have size and shooters as they prepare to meet at 6:15 p.m. on Friday in the Division II district championship at Ohio University’s Convocation Center.
The winner will advance to the regional tournament on Thursday, March 15, at 8 p.m. at Ohio University.
The finals are on Saturday, March 17, at 3 p.m. with the winner advancing to the state tournament on Friday, March 23, at 10:45 a.m. at the Ohio State University Schottstein Center against the Kettering regional winner.
“They have the most balanced offense we have gone up against,” said Fairland coach Nathan Speed. “They have good post play and solid guards. They run their offense well and they are disciplined in what they do.
“They defend well in the half court and they rotate quickly. They have four guards who are dangerous from the 3-point line.”
The Falcons beat Gallipolis 49-46 in the district semifinals to reach the title game.
Evan Conley scored 15 points, Lucas Thompson had 11 and Colin Woodside 10.
Woodside’s point total made him the program’s all-time leading scorer as he eclipsed the old record of 1,385 points held by Brian Young, a record that stood for more than 30 years.
On the season, the 6-foot-6 Woodside averages 15.6 points a game and 8.4 rebounds.
The Falcons are 19-5 on the season and won the Mid-States League Buckeye Division with a 12-2 record.
The 6-3 Thompson averages 12.4 points, 6.0 rebounds and 3.4 assists per game. The 6-foot Conley scored at a 10.4 average with 3.6 rebounds and 3.5 assists per game.
Woodside and Thompson are seniors while Conley is a junior.
The starting lineup also has 5-8 senior Spencer Conrad and 6-5 sophomore Huston Harrah.
Fairland (21-3) finished ranked fourth in the Association Press poll and is coming off a state tournament semifinal appearance in Division III last season.
The step up to Division II this season hasn’t affected the Dragons who lost twice in the Christmas tournament at Myrtle Beach and by two points to Akron St. Vincent-St. Mary’s in Kettering Round Ball Classic.
Fairland has a balanced offense led by 6-8 senior Kollin Van Horn who averages 16 points and nine rebounds a game along with four blocked shots.
Other key weapons in the offense are 6-2 senior guard Luke Thomas and 6-4 senior forward Isaiah Howell.
Thomas averages 14 points, 4.0 rebounds, 2.0 assists, shoots 52 percent from two-point range and 43 percent from 3-point range.
Howell gets 15 points, 7.0 rebounds, 3.0 assists and steals a game while shooting 60 percent from two-point range and 40 percent from behind the arc.
All three have more than 1,000 career points and both Van Horn and Howell have more than 500 rebounds during their four years.
The other two starters are 6-2 senior points guard Ty Staten and 6-1 senior Keedrick Cunningham. Staten averages 7.3 points with six assists, four rebounds and two steals an outing. Cunningham averages 10.1 points and four rebounds.