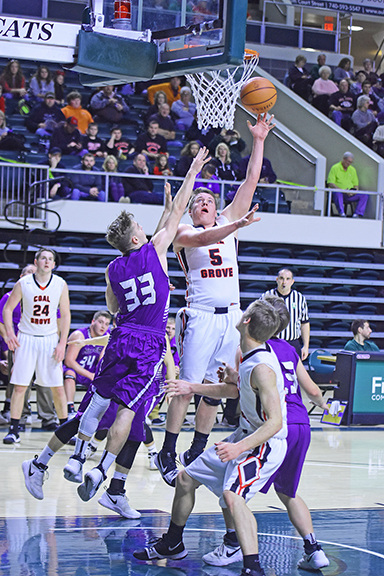 COAL GROVE — It’ll seem like Veterans’ Day for the Coal Grove Hornets and the rookie league for the South Webster Jeeps.
Coal Grove will match its senior-laden team against the South Webster Jeeps who do not have a senior on their roster in the Division IV district championship game at noon on Saturday at the Ohio University Convocation Center.
Coal Grove’s team that includes six seniors along with three juniors is 18-5 on the season and gunning for only the second district championship in school history.
South Webster is 10-15 on the season. The Jeeps play in the Southern Ohio Conference Division II against the larger schools that includes Oak Hill, Wheelersburg, Waverly, Minford, Portsmouth West, Northwest and Lucasville Valley.
The Jeeps are led by 6-foot-5 junior Shiloah Blevins who averages 22 points a game.
Blevins was injured during the season and the Jeeps struggled during his absence.
Without Blevins, the Jeeps lost 88-66 to New Boston late in the regular season. But in the district semifinals last Saturday, Blevins helped South Webster rally from a 12-point deficit in the third quarter for a 48-41 win over New Boston.
The other key players are 6-foot sophomore Devyn Coriell, 5-9 junior Jacob Ruth, 5-11 junior Samuel Holstein and 6-5 sophomore Braden Bockway.
Also in the picture are 6-1 sophomore Levi Murphy and 6-3 juniors Josiah Edwards and Jacob Witter.
Coal Grove coach Kevin Vanderhoof says the Jeeps are more than just Blevins.
“He’s definitely a big concern. He can handle it, shoot it, rebounds well and block shots well,” said Vanderhoof. “As a team, they’re pretty good defensively. They’re quick and rotate well. Offensive end, he’s capable of getting 30 any time.”
Coal Grove advanced to the district championship with a 66-48 win over the Miller Falcons.
Aaron Music scored 20 points, Cory Borders hit four 3-pointers and scored 16 points and Jeb Jones had 13 points.
Music is a 6-2 junior, Borders a 5-10 sophomore and Jones a 6-4 senior.
The trio are joined in the starting lineup by 6-4 senior Sam Angelo and 6-foot- senior Jordan Case.
Vanderhoof said his team has good balance and is very unselfish. He added that although Case doesn’t steal any headlines, he is a key in the team’s success.
“Jordan is the glue. He gives us so much and he doesn’t care if he scores. He plays defense, rebounds and all the hustle plays,” said Vanderhoof. “When Jordan starts doing his thing, everyone feeds off him. He’s the motor that gets us going.”
The Hornets are deep off the bench with 6-2 senior sharp-shooter Alijah Roman, 6-2 junior Nate Harmon, and 5-10 junior point guard Jaylen McKenzie.